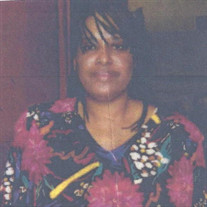 Sister Almeter Yvonne Moore Montgomery was born in St. Louis, MO to Ms. Bernice Rose who entrusted her in the care of John and Alma Ross, who graciously and lovingly raised Almeter to become a beautiful woman, with a strong desire to help people as the Lord would lead her to serve. Almeter graduated with honors from Soldan High School in St. Louis. She completed two years of pre-medicine courses until her first child was born and she chose to become a stay at home mother. . . Almeter began her Christian journey at St. Paul A.M.E.Church in St. Louis, MO where she served for many years. She began as a member of the Cherubim/Pearl Montgomery Children's Choir and the Junior Usher Board. Although her future husband, Tars Montgomery, III, attended the same church and served in identical youth groups; they never met each another until years later. As an adult, Sister Almeter joined Bible Way Church and later served with her husband, Minister Tars, at Lamb's Bride Church. It was God's plan that Almeter and Tars would meet when the pastor stated that a lady needed a ride to church for Bible study. Minister Tars volunteered for the task, the lady was Almeter. In January,1993, the two became one, as husband and wife. (Mark 10:8) . . . Almeter formed Love and Mercy Ministries and was known in the St. Louis community for the many years she distributed food to hundreds of people. Not having a church to facilitate the ministry, the Lord provided Pastor Dr. Bill Little that offered his church to host the food pantry. The Lord also opened additional opportunities for Almeter to serve with various Christian churches because of the mutual love they demonstrated toward God and people in need. During much of this time, Almeter was hospitalized. However, due to many prayers of pastors and prayer warriors, God would give her His grace and renewed strength. Almeter was also a powerful prayer warrior and many were blessed by her prayers, Sister Almeter is survived by her husband, Tars Montgomery, III; son, David Moore, Jr., (father David Moore, Sr.); grandchildren: Phylicia Washington, Julian Moll, Asia Latham, Jessica Moll and China Latham; one great grandson, Kenneth Washington-Carter and a host of relatives and friends. She was preceded in death by her son, Marc Latham; grandson, David Moore, III; mother, Bernice Rose; John and Alma Ross. Memorial Services will be held on Sunday, February 17 at 4:00 PM at "The Sanctuary", 965 Anglum Road, Hazelwood, Mo 63042. Private Interment at Jefferson Barracks National Cemetery. Services were entrusted to Valhalla Funeral Chapel.

Sister Almeter Yvonne Moore Montgomery was born in St. Louis, MO to Ms. Bernice Rose who entrusted her in the care of John and Alma Ross, who graciously and lovingly raised Almeter to become a beautiful woman, with a strong desire to help... View Obituary & Service Information

The family of Mrs. Almeter Y. Montgomery created this Life Tributes page to make it easy to share your memories.

Send flowers to the Montgomery family.