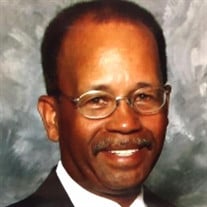 Anthony Keith Hill son of the late Vernon Batist Hill and Vera Admore Williams was born May 30, 1949 in St. Louis, Missouri. He attended Sumner High School where he graduated in 1967 as a proud Sumner “Bulldog”. At an early age he attended Centennial Baptist Church where he professed his faith in Jesus Christ and was baptized. In his adult age he re-dedicated his life to Christ while attending Grace Church - St. Louis. After graduating high school, Anthony attended Washington University in St. Louis where he studied Business Administration. Anthony met Vicki A. Saunders on a blind date through mutual friends and through their courtship they were joined in Holy matrimony on June 24, 1970. This union was blessed with two children. Anthony came from humble beginnings and went on to have a meaningful and impactful life. As a youth Anthony was an accomplished pianist and Boy Scout until he discovered a love for baseball where he was coached by and played for his father and went on to play for his high school team. Anthony also coached youth baseball. Anthony started his career as the Manager of Normandy Bowling Center, where he became an avid bowler. He loved to teach others how to bowl and he became a professional competitive bowler where he still holds local records. Anthony went on to become an entrepreneur joining his father in the dry-cleaning business in 1973 and eventually owning his own location. In 1983 Anthony transitioned from the dry-cleaning business to a successful career in sales with 3M Corporation where he was a copier salesman. Anthony used his success in the copier business and his entrepreneurial spirit to start his own copier and office supply business which he owned from 1992 to 1998. He went on to his final career which he truly loved with Metro Transit as a bus driver, he transitioned to a Transit Manager and remained with Metro until he retired in 2018. Anyone who had the chance to grace his path was greeted with his affectionate smile and his positive and energetic spirit. Anthony loved life, family, people and music. He was the family chef. He was an athlete, fierce competitor and strong leader. In his later age Anthony picked up the hobby of playing golf. Being a fierce competitor, he would play several rounds of golf a day to perfect his game. He loved to compete and the challenge of overcoming obstacles to achieve success. Anthony loved his two daughters dearly and he also found fulfillment when he reconnected with his only son in 2005. Over the past 15 years they formed a true father/son bond and beautiful friendship. In his retirement he loved spending time with his family, grandchildren and friends. He was preceded in death by his parents, Vernon Batist Hill and Vera Admore Williams, brother Vernon B. Hill Jr. and sisters Willa Mae Edwards Hill and his twin sister Antoinette Marie Hill. His beautiful life will forever be cherished by his wife of 50 plus years, Vicki A. Hill, his children: Angela (Melvin) Ballenger, Marcus Weaver, Antoinette (Patrick) Fuller, seven grandchildren, brothers; Ronald G. Hill, Paul E. Hill sister; Minette R. Hill. Anthony has five brother in laws and eight sister in laws and a host of nieces, nephews and cousins who love him dearly. ** Services were held at Valhalla Chapel of Memories** In lieu of flowers and plants the family encourages a donation to The Leukemia and Lymphoma Society or The Cancer Support Community in Honor of Anthony K. Hill.

Anthony Keith Hill son of the late Vernon Batist Hill and Vera Admore Williams was born May 30, 1949 in St. Louis, Missouri. He attended Sumner High School where he graduated in 1967 as a proud Sumner &#8220;Bulldog&#8221;. At an early age... View Obituary & Service Information

The family of Anthony Keith Hill created this Life Tributes page to make it easy to share your memories.

Send flowers to the Hill family.