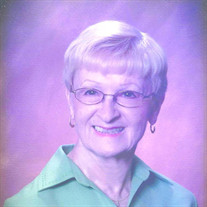 Audrey Fern Reich, daughter of Samuel F. and Wilhelmina K. [nee Buechler] Parrish, was born July 6, 1934, in St. Louis, MO. Her earliest years were lived in Lemay where she attended Hancock Elementary and experienced her childhood with her parents and sister. Upon completion of her formal education, she assisted her parents at home, especially her father who was a carpenter and building contractor. Her first payroll employment was in the manufacturing, packaging, and retailing of fireworks. She later received training and certification to become a licensed beautician and cosmetologist. Still, later she became an employee with A. G. Edwards where she was an office assistant and bookkeeper until retirement. On November 13, 1976, she married Eugene Anthony Reich of St. Louis with whom she was privileged to enjoy 45 years in the nuptial estate. He had served earlier in the United States Army and then with the Naval Reserves before becoming an employee with National Lead Company. He remained there until it's close and then was employed with Mehlville School District until retirement. While in retirement he assisted Audrey with her hobby of ceramic crafting and painting, as well as in the care of their grandchildren. At Gethsemane Lutheran in Lemay Audrey was baptized and confirmed in faith on June 1, 1963. Later, with the change of her residential address, her church membership changed, and finally, together with Gene, she became a communicant in 1999 at Peace Lutheran where their membership since has remained. Besides her husband, Eugene, Audrey is survived by her son Keith (Margaret) Dudley and the grandchildren: Nicholas Ryan Dudley and Kate Mackenzie Dudley. She also is survived by her sister Rita Washburn alongside nieces, a nephew, other relatives, and friends. Audrey enjoyed relatively good health until the advance of age began to weaken her condition. About five years ago she was diagnosed with dementia after which her condition continued to wane. Eight weeks before her passing Audrey entered Memory Care at the Daugherty Ferry/Big Bend Assisted Living facility and on November 29, she was admitted to St. Clare Medical Center. She remained there until December 3 when she was placed on palliative Hospice and returned to the Daugherty Ferry facility. It was there early Tuesday at 2:20 a.m. December 7, 2021, that she departed this life. She attained the age of 87 years, 5 months, and 1 day. Visitation will be held at Peace Lutheran Church on Monday, December 13, from 10 am until 12 pm, with the Funeral Ceremony at noon. Following this service, she will be interred at Jefferson Barracks National Cemetery, St. Louis, MO. Memorial Contributions may be made to St Jude's Children's Hospital. Services are under the direction of Valhalla Funeral Chapel.

Audrey Fern Reich, daughter of Samuel F. and Wilhelmina K. [nee Buechler] Parrish, was born July 6, 1934, in St. Louis, MO. Her earliest years were lived in Lemay where she attended Hancock Elementary and experienced her childhood with her parents... View Obituary & Service Information

The family of Audrey F. Reich created this Life Tributes page to make it easy to share your memories.

Send flowers to the Reich family.