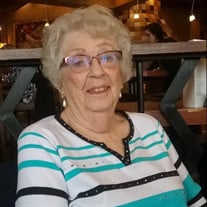 Born in Streator, Illinois on June 11, 1934, Barb was the only daughter of Elizabeth Euphemia (Dunsmore) and John Jeffrey Wright who both immigrated to the United States from Hawick, Scotland in the early 1900s. Barb was the Honored Queen of Job’s Daughters Bethel # 52 and graduated from Streator High School in 1952. She pursued her childhood dream of becoming a nurse and graduated from Methodist School of Nursing School in Peoria, Illinois in 1955. She married George Preston Bughman, from Ferris, Illinois, on June 19, 1955 in Streator, Illinois. Following her husband’s career, Barb moved from central Illinois to the St. Louis area in 1968. As a registered nurse, Barb worked in various nursing roles, but spent the majority of her career as a school nurse at Hazelwood East High School in north St. Louis County, retiring in 1994. She was committed to education and encouraged many young students to pursue a career in nursing. Barb was the ultimate caregiver, always putting the care of others first. She enjoyed traveling and spent much of her retirement at a second home at Lake of the Ozarks boating with her husband and grandchildren. In 2017, Barb moved to The Woodlands, Texas to be near some of her great grandchildren. Barb also enjoyed sewing and quilting. She was a lifelong die-hard Cardinal baseball fan and the ultimate dance grandma. Barb was passionate about genealogy and her Scottish descent representing her clan Murray of Athol. She was a member of St. John’s United Church of Christ in Chesterfield. Barb was the loving mother of Cindy (Tom) Bleikamp and Cheri (Tom) Karn; grandmother of five grandchildren Karen (Ken) Bratton, Lisa (John) Glett, Bridget (Kyle) Jutz, Amy Braun and Michelle Bleikamp; and great grandmother of Charles, Lillian, and Abigail Jutz and Emily, Matthew, and Levi Bratton. In lieu of flowers, donations may be made to the American Heart Association

Born in Streator, Illinois on June 11, 1934, Barb was the only daughter of Elizabeth Euphemia (Dunsmore) and John Jeffrey Wright who both immigrated to the United States from Hawick, Scotland in the early 1900s. Barb was the Honored Queen of... View Obituary & Service Information

The family of Barbara Anne Wright Bughman created this Life Tributes page to make it easy to share your memories.

Send flowers to the Bughman family.