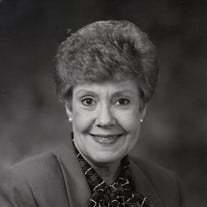 Barbara S. Johnson, 81, passed to the Life Eternal on Wednesday, November 25, 2015. Beloved wife and best friend of the late Thomas F. Johnson, Jr., devoted mother of Elise (Robert) Chapline and Elaine (Gregory) Caldwell, doting grandmother of Thomas and Mark Chapline and Matthew Caldwell, dear cousin of Robert (Nancy) Lischer of St. Louis, and their children and grandchildren. Dear sister, aunt, and friend to many. Barbara was preceded in death by her parents, Louis and Esther, her brother, John, and her husband, Tom. Barbara was born on January 24, 1934 at Deaconess Hospital in St. Louis, Missouri to Louis H. Strasser and Esther Lischer Strasser. She lived in South St. Louis and graduated from Roosevelt High School in January of 1952. Barbara was a strong student and the Editor of the high school yearbook. She was a member of Job’s Daughters International. Through her father’s work with the Wabash Railroad she developed a love of trains and travel, and enjoyed spending time on the family’s farm in Jerseyville, Illinois. Following high school, Barbara attended Washington University in St. Louis where she earned a degree in Occupational Therapy. Her work in this field took her to rotations in Topeka, Kansas, Denver, Colorado and San Francisco, California. She eventually returned to St. Louis and worked as the Director of Occupational Therapy at Jewish Hospital. In May of 1959, Barbara married the love of her life and best friend, Tom. Shortly after marriage, Tom was transferred by Southwestern Bell to Tulsa, Oklahoma, where their two daughters were born. In 1965, Tom was offered a position with Southwestern Bell in St. Louis, and Barbara was happy to return with her young family to her hometown. Barbara was a talented artist, cook, and seamstress. She used these gifts in her role as a mother and community volunteer. She was active in her daughters’ school and activities, serving as room mother, Girl Scout leader and Neighborhood Chairman. Barbara was an avid gardener and flower arranger. She was a Life Member of the National Council of State Garden Clubs, Master Judge, and Past President of East Central District. She was a member of the Kehrs Mill View Garden Club, Ikebana, and Designers Guild. She enjoyed all the beauty and wildlife in the world around her. Among her favorite places to relax were Sanibel Island, Florida and Grafton, Vermont or simply watching the birds in her own backyard. A 48-year member of Ladue Chapel Presbyterian Church, she volunteered in various capacities including Sunday school teacher, Vacation Bible School coordinator and landscape committee chairman. Her work on the landscape committee during the church’s remodeling project in earned her a citation from the Missouri Governor’s office for outstanding work in tree preservation. A memorial service and celebration of Barbara’s life will be held at Ladue Chapel, 9250 Clayton Road, on Saturday, January 9 at 2:00 pm. A private internment ceremony will be held for family at a later date. In lieu of flowers, memorials may be made to Ladue Chapel Barbara Johnson Memorial Fund or the Missouri Botanical Garden.

The family of Mrs. Barbara S. Johnson created this Life Tributes page to make it easy to share your memories.

Barbara S. Johnson, 81, passed to the Life Eternal on Wednesday,...

Send flowers to the Johnson family.