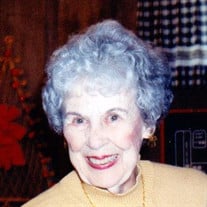 BERYL DOROTHY IMESON Beryl died on Saturday January 17, 2015 in the Platte Woods home she so dearly loved Born in St Louis, MO May 7, 1917 to Walter and Francis Edwards Beryl attended school in St Louis, upon graduation from Roosevelt High School in 1934 she was elected to the “National Honor Society”, “The Torch” on the basis of Scholarship, Leadership, Character and Service She attended Wooster College, but due to the accidental death of her father in 1937 she was unable to graduate. Her later studies trained her to be an accountant She received her Pilots License from Lambert Field in St Louis in 1940 She was one of 20 founding members of “The Powder Puff Squadron”. She was also a member of “Club 99” and NX 11, both are women’s flying clubs. In 1953 she married Joseph Henry Imeson, a TWA pilot. For the next several years they worked together to restore an old stone cottage in Platte Woods into a beautiful home. It sits on the oldest deeded property in Platte County. Over the next many years Beryl enjoyed being a first class hostess. Opening their home to many organizations and private family gatherings. Joe died in 1985. Beryl’s greatest joy in life was to live it to the fullest. She was a talented seamstress, adept at crafts. She loved to dance, to attend the theatre, play bridge, golf and give parties. Many of these things she shared with her dear friend Jim Rich in later years. She traveled extensively throughout the world with friends and family. She donated her time and resources to many charitable organizations in Kansas City & area. One that stands out is her generosity to Hope Lodge. For the past 12 years Beryl has suffered from Dementia. Under the direction of her Canadian Cousins, Douglas & Verla Edwards. She continued, as per wishes, to live in her own home with the dedicated care of 5 loving women employed by Senior Safeguard Private Home Care. Beryl will be missed by her Canadian family with whom she spent many wonderful holidays and special occasions. Appreciation goes to St. Luke’s Hospice Care for their end of life care and compassion A private service has been held. Her cremains are interred at Valhalla Chapel in St. Louis, with her Mother and Father.

The family of Beryl D. Imeson created this Life Tributes page to make it easy to share your memories.

Send flowers to the Imeson family.