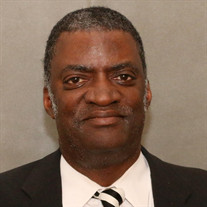 BRYAN LEZLIE MILLER Bryan Lezlie Miller departed this life on April 8th at his home in University City. Bryan was born on November 9, 1958 to the union of Sandy Jackson Miller and Mabeline Wright Miller in St. Louis, MO. The youngest of two children, he was preceded in death by his father. Bryan attended Scullin School in St. Louis, and later graduated from Neuwoehner High School in the Special School District of St. Louis County. Bryan worked for St. Louis Arc where he recently celebrated his 40th year as a loyal employee. He loved his job and had a tremendous work ethic which extended to the many activities he participated in. He was a Special Olympics athlete who won awards for basketball, softball, wrestling, golf (where he shot a hole-in-one), and running track. Bryan was also an avid sports fan. He loved attending St. Louis Cardinals baseball games and enjoyed watching St. Louis Blues Hockey and football. Bryan confessed a love for Christ at an early age. He was a faithful and dedicated member of Lane Tabernacle Christian Methodist Episcopal Church (C.M.E.) where he served as an usher and participated in numerous fellowship activities– among his favorite was line dancing. Bryan was active throughout the St. Louis district of the C.M.E. church, attending events and ushering. Bryan was proud to represent Lane as a delegate to the C.M.E. Church Annual Conference. Because of his steadfast devotion Bryan was affectionately known as “Mr. Lane Tabernacle” and he was honored with numerous awards for his faithful service. Bryan never met a stranger he didn’t know. He was always friendly and would often tell people about the activities he was participating in, family events and upcoming church programs. He especially enjoyed traveling to Sedalia, Missouri for his family reunion. He displayed the latest news on a small erasable white board he always had in his possession. He was always eager to take photos of church events. Bryan always carried maps, and had a keen sense of direction – helping family members and friends navigate through various areas. He enjoyed reading the stock pages, listening to music and serving as the DJ at family functions. His fancy dance moves earned him the nickname “Disco”. Bryan is survived by his mother Mabeline Miller, his brother Anthony Miller, his Aunt Gloria Miller, numerous cousins, his Lane Tabernacle and St. Louis Arc families and friends too numerous to mention. Visitation is from 9 to 10:50A.M. on Saturday April 20 at Lane Tabernacle C.M.E. Church, 910 North Newstead at Enright in St. Louis. The Funeral begins at 11 A.M. Interment at Valhala Cemetery.

BRYAN LEZLIE MILLER Bryan Lezlie Miller departed this life on April 8th at his home in University City. Bryan was born on November 9, 1958 to the union of Sandy Jackson Miller and Mabeline Wright Miller in St. Louis, MO. The youngest of two... View Obituary & Service Information

The family of Mr. Bryan Lezlie "Disco" Miller created this Life Tributes page to make it easy to share your memories.

Send flowers to the Miller family.