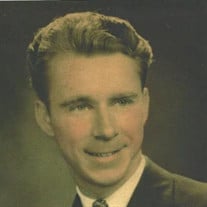 Bryan Lavern Williams, of the greatest generation, peacefully entered into rest on Thursday, January 21, 2016 at the age of 90. He was born in St. Francois County, Missouri, to the late Edward and Iva (nee Gorton) Williams. He served his country... View Obituary & Service Information

The family of Mr. Bryan L. Williams created this Life Tributes page to make it easy to share your memories.

Send flowers to the Williams family.