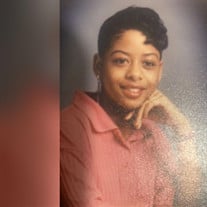 Clarissa Eugenia (Campbell) Johnson, 44, of Saint Louis Missouri, passed away on April 4, 2022, after battling years of health complications. Clarissa was born on April 20th, 1977 to Byron Campbell Sr and Jeannette Campbell in Saint Louis, Missouri. From a very young age, she was always a very determined girl. While attending McCluer North High School, she had 2 children, T'Keyah and Tre'Von. Even as a very young mother, she was determined to graduate high school and did so in 1995. She went on to study nursing in college but soon realized that was not her calling. She knew she wanted to dedicate her life to her children and being a fantastic and wonderful mother. She then had her daughter, Tionna, and later her final child, Tavion. Clarissa excelled at uplifting her kids and supporting them through any ups and downs they were facing. Although Clarissa was taken from us too soon she was able to see so many things in her life. She was able to see and build relationships with her 5 grandchildren. She was also able to see her oldest son, Tre'Von, get married and live out his childhood dream of playing in the NFL. She was the proudest mother and grandmother and loved showing off their accomplishments. Clarissa made it her mission to improve the lives of others. Clarissa was passionate about her family. She will be missed greatly. Clarissa was predeceased by her sister, Jeanna Campbell. She is survived by her children, T'keyah Johnson, Tre'Von Johnson (Myley Johnson), Tionna Johnson, and Tavion Johnson; her father- Byron Campbell Sr, her mother- Jeannette Loving Campbell, her brothers- Byron Campbell Jr, Brandon Campbell, and Bryan Campbell, and her sister-Candis Eberhart (Jason Eberhart)

The family of Clarissa Eugenia Johnson created this Life Tributes page to make it easy to share your memories.

Send flowers to the Johnson family.