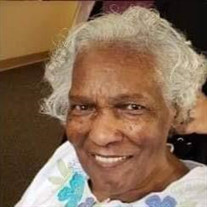 On Friday October 18, 1929 in Sunflower County, Mississippi, Rev. Tommie Lee and Mother Mamie Anderson Brand welcomed the second of twelve children, Clora Mae “Mema” Brand. In her late teens, Clora gave birth to a beautiful daughter, Cornelia Brand. The love she had for her daughter led to the greatest love of all, the love of Jesus Christ. Clora gave her life to the Lord at St. Luke Church of God in Christ in Greenwood Mississippi. Little did she know, accepting Jesus Christ as her Lord and Savior would change her family forever. When she shared the Good News with her mother, Mamie decided to see for herself. By leading her mother to Christ, Clora established the family’s generational foundation in faith. Unfortunately, this salvation caused discord with her father. Leaving Cornelia in Mississippi under her mother’s care, Clora moved to St. Louis with her brother, Willie Brand. It was here that she joined Kennerly Temple Church of God in Christ, under the leadership of Eld. Frank J. Hayden and later Bishop R.J. Ward. Clora served Kennerly Temple faithfully, by attending prayer services and Sunday School. In the late 1950s, she established her family by bringing Cornelia to St. Louis and having a son, Dwayne Brand in 1961. She supported the family by working as a dialysis nurse at Robert Koch Hospital and working as a homecare nurse. She continued to work as a dialysis nurse, even after her retirement from Koch Hospital. She truly had a heart for helping people and never shied away from doing what she could to help. Even when she recognized a patient in the ER as one of the individuals that robbed her home, she was able to let her light shine. She fervently prayed for him and ensured that he and the young lady that he was with knew they were forgiven. In her retirement, Clora remained hard-working as a greeter and seat attendant for the former Kiel/Savvis Center. In 1988 Clora became one of the founding trustee members of Northview Mission Outreach Church of God in Christ, under the leadership of Cornelia’s husband and her son-in-love, Pastor Jack A. Watson. She was proud to serve this young ministry in whatever capacity was needed, including Sunday School and Vacation Bible school teacher, Usher and Nursing Boards, and choir members. Clora assisted Pastor Jack in ministry until his death in 2010. She continued to serve at All Creation Northview Holiness Family Church C.O.G.I.C. under the leadership of Superintendent Marquaello A. Futrell, until medical complications in 2017. In addition to the church, Clora was very active in each of her grandchildren’s lives. She truly believed that they could do ANYTHING and constantly encouraged them. She was known to travel across the city and state to attend school events and graduations. Her bible was filled with newspaper clippings, stories, pictures, and letters from Jerrell (“the one that made me MEMA”), Corey, Danielle “Nikki,” Dwayne “Man,” and Joshua. She was a fierce competitor and was known to trash talk her grandchildren and great-grandchildren in games of Uno, Connect 4, Trouble, and Sorry. She was an avid dog lover and owned many of them, over the course of her life. On Sunday Morning, April 26, 2020, the Lord saw fit to end Clora’s suffering on this earthly plane and begin her heavenly reign. He called her home to join the family members who preceded her in death: her parents, Rev. Tommie Lee and Mother Mamie Anderson Brand; four brothers, Willie, Tommie, OC, and Albert Brand; five sisters Louise Jordan, Mary Jackson, Elizabeth “Shange” Johnson, Virgie Hodges, and Mamie Thomas; and her daughter and son-in-love, Cornelia and Jack Watson. Clora leaves behind to cherish her memory: one son, Dwayne Brand Sr.; five grandchildren, Jerrell (Jennifer) Watson, Corey Watson, Danielle Brand, Dwayne Brand Jr, and Joshua Watson; three great-grandchildren, Jett, Joss, and Jaxx Watson; one brother, Matthew Brand (Dorothy); two brothers-in-love, Judge Jackson and Jeffery Hodges; one sister-inlove, Luevern Brand; and a host of nieces, nephews, cousins, and friends. Clora will always be remembered as a woman who first loved God, her family, and her church. Services were held at Valhalla.

The family of Clora Mae Brand created this Life Tributes page to make it easy to share your memories.

Send flowers to the Brand family.