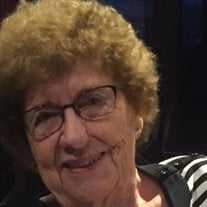 Darlene Morlang April 09, 1925 - January 19, 2019 St. Louis County, Missouri Darlene Stockglausner Morlang passed away peacefully on January 19, 2019 at the age of 93. She was preceded in death by her parents Cassie (Kuntz) Waters, and Burley Kuntz. She will be lovingly remembered and missed by her children, Rolene Stoops (Tom) and her children Molly and Kelly, Sharon Franke (Chris) and her children Amy (Russell) Angie, Brian (Beth) , Adam and Meredith (Josh), Vickie Brown and her children Eric, Aaron (Natalie), Roy (Jennifer) and Cassie (Jacob), Christy (Ed) Eckert and her children Michael and Zachery (Tiffany), Betsy (Dan) Fitzgerald and her children Katie(Lance) and Andrew. There are 22 great-grandchildren and 4 great, great grandchildren. Darlene had a large extended family which included her stepchildren David, Dan and Karen Morlang, and the Baseler family. Darlene was born in Shelbyville, Missouri on April 9, 1925. She grew up on the farm with her parents Cassie and Burley Kuntz and was an only child. At the age of 17 she taught school in the one room school where she had attended school. She later moved to Kansas City and then to St. Louis. There she met Roy Stockglausner whom she married. They moved to Affton, Missouri where they raised their 5 daughters. Darlene was an avid reader and enjoyed cooking and caring for her daughters, which of course was a full time job. In later years she married Dan Morlang, moved back to the farm in Missouri where she was born and then to Shelbina, Missouri. In lieu of flowers, donations to Shiloh Christian Children's Ranch, 601 N. Center Street, Shelbina, MO 63468 or Prodigy Leadership Academy at www.goprodigy.org/morlangmemorial or by mail to P.O. Box 2172 Cape Girardeau, MO 63702. Private Inurnment at Valhalla Indoor Mausoleum.

The family of Mrs. Darlene A. Morlang created this Life Tributes page to make it easy to share your memories.

Send flowers to the Morlang family.