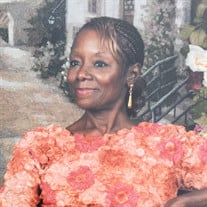 Diane Jackson was born May 31, 1946 to Mary Hagens and Donald Harvey in St. Louis, Mo. Her parents preceded her in death. She attended Soldan for most of her high school years, but graduated from Beaumont High School. She received a Bachelors of Science Degree in Nursing from St. Louis University. Thereafter, she attended Saint Louis University's new Masters of Science Nursing Program for Nurse Practitioners and was awarded a Masters in Science Degree (M.S.), becoming one of Missouri’s first Nurse Practitioners. During Diane’s career, she consistently worked in the medical field, beginning with Saint Louis Comprehensive Health Center (now known as the Care STL Health Center) where she was recruited by her friend and mentor, the Executive Director, Mr. Morris Henderson. In 1982, Diane established Home Nursing Association, the first independent home health agency in the St Louis metro area and the only Black run agency of its kind in the state of Missouri. After 4 years, Diane was recruited to New York City as a consultant offering expertise to another freestanding home health agency and fledging durable medical equipment company. As a response to efforts toward privatization, she answered the urgent request of a professional colleague in Maryland to provide crisis intervention at a struggling health care agency in Severna Park, MD. Later, Diane moved to Baltimore, Maryland to consult with multiple agencies including several home care and emerging health care start-ups. In Maryland and the Washington, DC area she was a sought after advisor to academic, nonprofit, and privately held organizations to lend her intellectual prowess to all; including: well-established physician networks, pharmaceutical companies, government entities, and the academic environs of Morgan State and Johns Hopkins Universities. Following several personal health and medical crises, Diane decided to retire to the Orlando, Florida area, where she remained until she was quietly called to rest in the Lord. Diane was a free spirit known for her mental sharpness, warm and engaging disposition, elegant style, faith in God, and sense of humor. She loved to travel and enjoyed dancing and listening to music -- especially Jazz and Gospel. She also loved being a grandmother and would playfully engage in games and conversations and go on great adventures (often to Disney World) with her four grandchildren. Diane never met a stranger. She was dynamic and charismatic, naturally drawing others in with her natural beauty - both inside and out - and her incredible intellect. Those who encountered her, frequently spoke in amazement about her generosity of spirit. Above everything, she was an incredible friend to all she encountered, with the rare ability to maintain decades-long relationships with many. Diane will be lovingly remembered by her daughter, Ronda Jackson; sons, Rodney Jackson (Albie) and Carey Jackson (Diana); granddaughter, Skylar Jackson; grandsons, Dylan Jackson, Terrence Jackson, and Tyler Jackson; sisters, Lori Hagens and Janice McClendon; niece, Lisa McClendon; nephew, Eric McClendon; and a host of cousins and friends. Service is Private

Diane Jackson was born May 31, 1946 to Mary Hagens and Donald Harvey in St. Louis, Mo. Her parents preceded her in death. She attended Soldan for most of her high school years, but graduated from Beaumont High School. She received a Bachelors... View Obituary & Service Information

The family of Diane Jackson created this Life Tributes page to make it easy to share your memories.

Send flowers to the Jackson family.