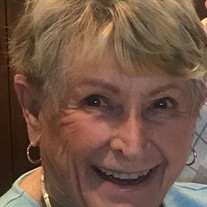 Doris Audrey Peche was born on June 26, 1931, in St. Louis, Missouri to Vera and William Peche. She had two younger brothers, Bill and Harry Paul. She attended Cleveland High School, where she was voted Football Queen, and graduated in 1949. She and her girlfriends formed two groups, the Chics and the NTTL’s. She was active in both and the friendships she made were so special and important to her that they lasted her entire life. Doris also attended Concordia Turners, where she met the handsome, athletic Elmer Leeker, who would become her husband and change her life forever. They married on April 11, 1950, and had five children together, Suzette, David, Bill, Leslie, and Jason. As you can only imagine, their life was filled with lots of activity, schedules, loads of laundry, and much happiness. Doris was a good mom, a wonderful wife, and was extremely organized. In fact, besides caring for such a large household, she also found time to play bridge, sew, bowl and needlepoint ~ and eventually, she took up golf. Doris became quite accomplished at the sport and competed many years around the St. Louis area. Her later years were spent with her husband, both avid golfers, on their beloved island of Abaco, in the Bahamas, where they owned a second home. Doris peacefully passed at home while surrounded by family and holding her husband’s hand on February 19, 2022. First and foremost she was our Mom~ she loved her family fiercely and we will forever hold her in our hearts. She is survived by her husband of almost 72 years, Elmer Leeker, her daughter Suzette Leeker, her son, William “Bill” Leeker (Linda), her son-in-law, Richard “Murph” Murphy. Four of her grandchildren also survive her, Ryan Carlstrom (Melissa), Katie Watters, Angie Dunlap (Mark), and William “Will” Leeker. And, ten great-grandchildren survive her as well, Josh and Gabe Carlstrom, Jacklyn Dickey, Samantha and Sydney Marzlo, Kaiden Watters, Winston, Ella Coraline, Maddox, and Shepard Dunlap. Doris was preceded in death by her parents, Vera and William Peche, her brothers, William “Bill” And Harry Paul Peche, two of her sons, David and Jason Leeker, her younger daughter, Leslie Murphy (Richard “Murph”), and her oldest grandchild, Carie Dickey (Rob). No public viewing or service will be scheduled~ only a private family time. In lieu of flowers, we would greatly appreciate a memorial donation to St. Louis Shriners Children’s Hospital. https://donate.lovetotherescue.org

Doris Audrey Peche was born on June 26, 1931, in St. Louis, Missouri to Vera and William Peche. She had two younger brothers, Bill and Harry Paul. She attended Cleveland High School, where she was voted Football Queen, and graduated in 1949.... View Obituary & Service Information

The family of Doris Peche Leeker created this Life Tributes page to make it easy to share your memories.

Send flowers to the Leeker family.