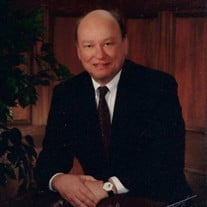 Earl Lazerson, President Emeritus of Southern Illinois University, Edwardsville (SIUE), passed away on October 29, 2021 at age ninety. Lazerson was born in Detroit on December 10, 1930 to Nathan and Cecilia (Stashefsky) Lazerson. He attended one of America’s premier public high schools – Cass Technical – where he became Student Body President and Class Valedictorian. After high school, he attended Wayne State University where he graduated with a degree in mathematics, and was then a Fulbright Scholar studying in Leiden, the Netherlands, before completing graduate degrees at the University of Michigan. He returned to the USA and began his teaching career at the University of Michigan. He then spent two years working as a mathematician at the Institute for Defense Analysis, followed by professorships at Washington University and Brandeis University. In 1969 he began his career at SIUE as a Professor of Mathematics. He then became Dean of the School of Science and Technology, and Vice President and Provost of the University, before being promoted to the Presidency of SIUE in 1980 where he served for nearly fourteen years before his retirement. Lazerson was always focused on making higher education accessible to students of modest means and he earned a reputation as a visionary leader of unimpeachable integrity. His work on behalf of the metro St. Louis community was wide-ranging and productive. He served on the Board of Directors of the Jackie Joyner-Kersee Youth Center Foundation, the St. Louis Symphony Society, the Jefferson National Expansion Memorial Association and was the Chair of the City of East St. Louis Financial Advisory Authority. Lazerson was especially proud of his work establishing and being the first Chairman of the Leadership Council of Southwestern Illinois and the Southwestern Illinois Development Agency (SWIDA). Following his retirement from the University, Lazerson served as the Chairman of the Board for the AAA Auto Club of Missouri, collaborated on and published a number of papers on mathematics, and did some consulting on complex commercial real estate transactions. He is survived by his beloved wife Ann (nee’ Harper), Chesterfield, MO; devoted sons Joshua (Nancy), Encinitas, CA and Paul (Deborah), Edwardsville, IL; grandchildren Emma and Aris; and Earl’s younger brother Dr. Howard (Joan) Lazerson, Pacific Palisades, CA. Memorial services will be held on Saturday, November 13, 2021 @ 2:00PM at Bellerive Gardens Mausoleum Chapel 740 N. Mason Rd. Creve Coeur, MO 63141 (Ceremony in The Chapel within the mausoleum at the back of the cemetery; follow the signs) In lieu of flowers, please send donations to the Ann & Earl Lazerson Endowment at SIUE’s College of Arts & Sciences – Fund 8180 (618) 650-5048. Under the direction of Valhalla Funerals.

The family of Earl E. Lazerson created this Life Tributes page to make it easy to share your memories.

Send flowers to the Lazerson family.