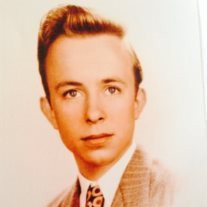 Hagenbrok, Edward John Edward Hagenbrok, (Poppie or Pop to those who loved him) former resident of St. Louis, MO, Riverview, FL and eventually Alpharetta, GA, age 86, transitioned January 15, 2014 . Born on October 30, 1927 in St. Louis MO to John Charles and Vanetta Pauline Hagenbrok, he was a child of the great depression. This impacted his life tremendously and resulted in his relentless determination to succeed in life. He truly was a self-taught and self-made man. A born salesman he would tell his children that he sold newspapers on the street corners of St. Louis at the tender age of 5 even in the deepest of snow. (His age seemed to become younger and the snow deeper as his children grew.) He sold soda in Sportman’s Park during the 7th game of the 1946 Cardinal vs. Boston World Series where he worked his way down to home plate to witness Enos Slaughter’s mad dash steal from first to home to win the world series. He LOVED that story. He joined the US Navy and was stationed at the US Naval Air Force Base in Pensacola, Florida until March 1949. Upon discharge he sought employment at Joy Manufacturing as a salesman calling on railroads though out the midwest. When Joy decided to relocate their St. Louis facility to Ohio in the spring of 1965, he struck out on his own and started Mark Equipment Co. Joy sued him in federal court for opening his own shop. The day of his court appearance Ed once again trudged through snow towards the St. Louis Courthouse and walked into the courtroom in snow covered work boots. Dripping slush all over the defense table floor, Judge Harper listened to one man’s story of providing for his family. He appeared alone in court without representation. Joy had a table of well-dressed corporate lawyers. He came home from work that evening with quite a story of his day since he hadn’t told his wife or family about the lawsuit as to not worry them. He won the lawsuit. His daughter would later interview that same judge for a college paper. Judge Harper told her that the case of Edward Hagenbrok vs. Joy Manufacturing was a landmark case that set precedent for non-compete laws. Ed REALLY LOVED that story. The first large contract Mark Equipment Co. landed was with NASA during the Apollo space program to work on the Gemini capsule. He also was awarded another government contract to manufacture equipment that provided field repair work for combat soldiers during the Vietnam War. President and CEO of Mark Equipment Co. for 45 years, Ed was “nudged” into retirement four years ago to move closer to family. He had many passions: coaching his son Mark’s baseball and soccer teams, the St. Louis Cardinals, Budweiser beer, station wagons, trout fishing, camping in a tent by the stream, the Kentucky Derby, all gatherings at “Camp Eddie”, Halloween with his grandchildren, St. Patrick’s Day, the 4th of July, playing hearts and pinochle, western movies, Louie L’amour, science and WWII history. He taught us the value of possessing an entrepreneurial spirit, how to see the bunny on the moon, how to shoot a gun, to think for yourself, to question everything but stay out of the federal courts, the value of asset allocation, to measure twice and cut once and that you can do anything but do it in moderation (although he could have fun at a party!) He met the love of his life and wife of 64 years at a St. Patrick’s Day dance. He took her home from that dance in the rumble seat of a friends old Ford. Quite scandalous at the time! They were high school sweethearts and he carried her books in school. It was this story that he truly loved and held dear to his heart…. he’d proudly share it with anyone he met. Edward John Hagenbrok is survived by his devoted and loving wife, the beautiful Betty Jane (Geldbach) Hagenbrok., daughter Susie (Hagenbrok) Rhatigan, of Alpharettta, GA and son Mark Edward Hagenbrok (Maureen) of Memphis, TN, his loving grandchildren Nathan Edward Rhatigan (Erin), Jessica Michelle Hagenbrok Morris (Tommy), Ryan Michael Hagenbrok (Katie), Shane Patrick Rhatigan and Caitlyn Suzanne Hagenbrok Kiedis (Zach) as well as his two incredibly adorable great-grand children Wyatt Patrick Rhatigan and Delle Florence Morris. His family will miss him terribly but know he is with them always.

The family of Mr. Edward John Hagenbrok created this Life Tributes page to make it easy to share your memories.

Edward Hagenbrok, (Poppie or Pop to those...

Send flowers to the Hagenbrok family.