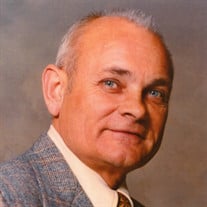 JOHNSTON, FLOYD W. Our beloved father passed away on August 12, 2016, peacefully at home with family. He was 98. Floyd was born to Rev. Hubert and Della Johnston in Arkansas in 1918. With his two sisters and a brother, he spent his early years as a small town minister's child until he left to serve in the Army Air Forces in WWII. He later moved with his wife and family to St. Louis to begin his business career. Floyd traveled often in the 1950s as a division manager with Holland Furnace Company. At a time when private planes for corporate travel were rare, he used that means of transportation to cover territories in several states and limit his days away from home. He was always grateful to the owners of Holland for giving him the experience and the means by which to establish AAA Construction Company in 1962. He sold the company and retired when he was 65, although he continued to be involved in community and professional associations and activitiesthrough his 90s. In 2000 he celebrated with family and friends 50 years as a Mason and a Shriner in separate ceremonies held respectively by Gardenville Cache Lodge #455 and Moolah Temple. He was active in the Motor Patrol and served as Captain in 1980, 1981, and 1982. With his wife, Virginia, Floyd enjoyed traveling to conventions and participating in parades throughout the country. He was President of the Missouri Association of High Twelve in 1996-1997. One of his activities in retirement was serving as a driver for the local Scottish Rite Clinic that provided care to children in neighboring towns. With the exception of travels and time spent at their home in St. Petersburg Beach, Florida, Floyd lived with his family in St. Louis and was active in the community. In the 1970s, he served as President of what is now the St. Louis Hills Neighborhood Association. He was President of Hope United Church of Christ in 1971 and again in 1976. Floyd was an avid reader and loved to frequent used bookstores to find his favorite authors. He faithfully followed the Cardinals from his early days in St. Louis Hills as a neighbor of some of the players. They used to joke that he was the only one who had a real job. Throughout his life, he had incredible energy, optimism, and a loyalty to people that was returned by his wide circle of friends and associates. His enjoyment of life and his insistence even well into his 90s that he always felt fine drew people to him. He and his sisters loved to sing and Floyd continued to do so, often in the early morning hours. He was well loved and a welcome presence in the lives of many. Floyd is survived by his daughters, Judith Kolb (Ron Hooven) and Sydney Gillick (John); his son, Jerry Rushford (Lori); grandchildren, great grandchildren, nieces, nephews and other loving family and friends. He was preceded in death by his wife of 69 years, Virginia; his daughter, Sandra Brumley (Ron); two sisters and a brother. The family wishes to acknowledge and thank the home health care and hospice-at-home nurses and professional staff of St. Anthony's Hospital for their care and kindness during Floyd's final months. In lieu of flowers, donations in Floyd's memory to Shriners Hospitals for Children www.shrinershospitalsforchildren.org are appreciated.

JOHNSTON, FLOYD W. Our beloved father passed away on August 12, 2016, peacefully at home with family. He was 98. Floyd was born to Rev. Hubert and Della Johnston in Arkansas in 1918. With his two sisters and a brother, he spent his early years... View Obituary & Service Information

The family of Mr. Floyd Willis Johnston created this Life Tributes page to make it easy to share your memories.

JOHNSTON, FLOYD W.
Our beloved father passed away on August 12,...

Send flowers to the Johnston family.