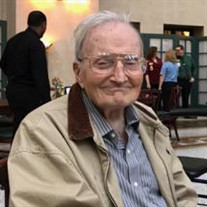 Monnig,George Osmond, 92, passed away on July 5, 2017 at home surrounded by those who loved him. Dr. Monnig was born on November 25, 1924 to Hugo Monnig and Alice Osmond Monnig in St. Louis. A member of John Burroughs School Class of 1942, he attended Princeton University from 1942-1943. Serving in the United States Army from 1943 to 1945, he was awarded 3 Bronze Stars for his time in France on Omaha Beach. Completing his studies in Physics at Princeton University in 1948, he participated in early supersonic research for NACA (NASA) at Langley Field, VA. Dr. Monnig received his PhD from Washington University in 1961. He married Elizabeth Farrelly Kavanagh in December, 1969. Elizabeth, stepson Sean and he resided in Huntsville, Alabama dividing their time between town and his beloved Lake Guntersville. During this time he worked for several firms involved in the space program at Marshall Space Flight Center. He had a passion for all things mechanical. He was an avid private pilot, a British automobile enthusiast, and most of all loved computers. Amongst his proudest accomplishments was the work he did for the artist on the sculpture "Primogenesis", on display at Clayton High School. He was always looking for another adventure and never met a stranger. He is survived by his 3 nieces, Lore Monnig of New York City, Lindsay Holbrook of Mercer Island, Washington and Lisa Miller of Salt Lake City, Utah, and a stepson Sean Kavanagh, of St. Louis, MO. He will be dearly missed by all who knew him. Funeral Ceremony will held on Tuesday Aug 8, 2017 at 10:00 am Valhalla Chapel of Memories, 7600 St Charles Rock Road, ST Louis 63133 ...with Full Military Honors. Interment Valhalla Cemetery.

Monnig,George Osmond, 92, passed away on July 5, 2017 at home surrounded by those who loved him. Dr. Monnig was born on November 25, 1924 to Hugo Monnig and Alice Osmond Monnig in St. Louis. A member of John Burroughs School Class of... View Obituary & Service Information

The family of Dr. George Osmond Monnig created this Life Tributes page to make it easy to share your memories.

Send flowers to the Monnig family.