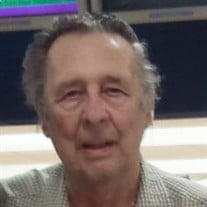 GEORGE ARTHUR MOORE MAY 13, 1935 - JULY 29, 2019 George was born on May 13, 1935 in Detroit, MI and died July 29, 2019 in St Louis surrounded by his family. He was born to Albert and Emma [nee Randall] Moore. After serving his country in the United States Army during the Korean Conflict, he married Virginia [nee Krakus] Moore on December 28, 1958 and retired from Chrysler after 30 plus years at the Fenton II Plant. Surviving are four children: Brian [Fran] Moore, Darren [Patricia] Moore, Tracy Moore, and Deanna Moore; seven grandchildren: Rocky [Holly Moore], Bria [Kyle Winston], David [Dorothy Moore], Andrew, Lauren, Galina, and Nickolas; and four great grandchildren: Cooper, Chloe, Jonah, Violet. He was preceded in death by his parents, his wife, one sister, four brothers, and eldest son. George loved to bowl, spend time with his family, and was an avid supporter of the Detroit Red Wings Hockey Team. He was a man of faith, a war veteran and a chemotherapy survivor. He loved being outdoors, being active, and spending time with animals. He was a dedicated husband, father, grandfather, and great grandfather. Graveside Services will held at Jefferson Barracks National Cemetery on August 16th, 2019 at 11 o'clock A.M., with Full Military Honors. Memorial contributions may be left to the Missouri "Make a Wish Foundation" in Honor of his granddaughter, Galina. Valhalla Chapel is in charge of the arrangements.

The family of George A. Moore created this Life Tributes page to make it easy to share your memories.

Send flowers to the Moore family.