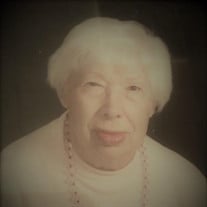 Georgene W. Garvey, Washington, MO, formerly of Ferguson, passed peacefully on Saturday, June 19th, the eve of her 100th birthday, with her two daughters by her side. Mrs. Garvey was born June 20, 1921 on a Randolph County Illinois farm, the third daughter of George and Grace (Higgerson) Reese. She graduated from Pinckneyville, IL High School and moved to St. Louis to study and work. There she met William F. (Floyd) Garvey. After the war, they married on February 14, 1948 and moved to a Ferguson home where they raised a family and a large garden. It would be their home for 66 years. Mrs. Garvey is survived by daughters Barbara A. (John) Betz, Pacific and Marilyn S. (Terrence) Smith, Marthasville, grandchildren Maureen (Eric) Stasen, Ellisville, Michael (Karen) Betz, Villa Ridge, Nolan (Catherine) Smith, Liberty, Robert (Rosie) Betz, Crestwood, and Keith (special friend Yadis Arroyo) Smith, Charleston, SC. She enjoyed ten great-grandchildren. Preceding her in death was husband Floyd, daughter Paula J. and son William F. Jr, five sisters and four brothers-in-law: Ruby (Hob) Bigham, Lorraine (Bill) Lively, Dorothy (Jim) Montgomery, Edna Torina and Rosalie (Brian) Snider. Mrs. Garvey was a member of Ferguson Methodist Church, later St. Mark’s United Methodist Church in Florissant. A homemaker first, she was later employed at the Northland Famous and Barr and ran a secretarial service in downtown Ferguson and from her home. She was a loving wife, mother, and grandmother. She enjoyed her flowers, a good cup of coffee, home cooked meals and the daily paper. A lifelong Republican she lamented the demise of the Globe-Democrat. Services will be held June 28, 2021 at Valhalla Chapel in St. Louis. Visitation will be from 11:00 to 12:00, the service will begin at 12:00, with interment to follow at the cemetery. Memorials, if so desired, may be made to New Haven Hospice Care. The family wishes to thank the staffs of Victorian Gardens Senior Living in Eureka and Oak Pointe in Washington for their kind care and friendship in her last years. Also a big thank you to Dr. Sarah Winkeler, Dr. Jeffrey Brown, and New Haven Hospice Care. The kindness and concern you all showed will be long remembered.

Georgene W. Garvey, Washington, MO, formerly of Ferguson, passed peacefully on Saturday, June 19th, the eve of her 100th birthday, with her two daughters by her side. Mrs. Garvey was born June 20, 1921 on a Randolph County Illinois farm, the... View Obituary & Service Information

The family of Georgene W. Garvey created this Life Tributes page to make it easy to share your memories.

Send flowers to the Garvey family.