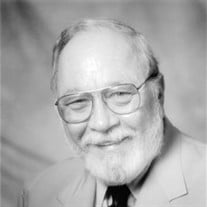 Gilbert W. Meier died in Austin, TX in the early hours of April 24, 2016; he had been injured in a fall. Gil was born in St. Louis, MO on April 10, 1927 to Walter F. Meier and Mildred Kuhn. After graduating from Southwest High School, he earned a bachelor’s degree in psychology and zoology from Washington University in St. Louis. His college years were interrupted by service in the United States Army. After receiving a master’s in psychology from the University of Illinois at Urbana-Champaign in 1949, he returned to Washington University for his 1953 doctorate, again in psychology and zoology. In his dissertation he looked at the effects of natal oxygen deprivation on behavior and EEG activity. His career was devoted to the science of animal behavior. He first taught in the Department of Psychology at Vanderbilt University where he was promoted to associate professor in 1958. Later in his career he was variously at the National Institutes of Health, George Peabody College of Vanderbilt University, the University of Puerto Rico Medical Center, and the University of Nebraska Medical Center. He retired from NIH in 1998. For many years (1970-1981), he edited the journal Developmental Psychobiology. His research focused on the early development of brain and behavior. A 1955 paper with his student Emil Menzel in the journal Science looked at the effects of prenatal oxygen deprivation on subsequent behavior. A 1965 paper with his postdoctoral student Ralph Berger (published in Experimental Neurology) looked at the development of sleep and wakefulness patterns in infant rhesus monkeys. Later he would look at phenomena such as eye movements in the sleep of infant rhesus monkeys, the ontogeny of play (Meier & Devanney 1974 in American Zoologist), and dominance status within a troop of rhesus macaques (Bartlett & Meier 1971 in the journal Primates). He directed 26 doctoral dissertations. Gil is survived by his son Richard P. Meier (of Austin), Richard’s wife Madeline Sutherland-Meier, and their daughter Erica, and by his daughter Liese N. Meier (of Corning, NY), her husband J. T. Haran, and their children Thomas and Eileen. He is also survived by his sisters Audrey Meitz and Loraine Tracy, and by Loraine’s children Debbie, Kevin, Bryn, Sean, and Rebecca. Lastly, he is survived by his first wife Colene Van Deusen (née McKinney), whom he rejoined for the last two decades of his life. The family asks that those who wish to honor his memory consider a donation to the Gilbert W. Meier and Colene McKinney Undergraduate Internship at Washington University in St. Louis: https://gifts.wustl.edu/ A graveside memorial service will be held in St. Louis at Valhalla Cemetery...on Aug 8,

Gilbert W. Meier died in Austin, TX in the early hours of April 24, 2016; he had been injured in a fall. Gil was born in St. Louis, MO on April 10, 1927 to Walter F. Meier and Mildred Kuhn. After graduating from Southwest High School, he earned... View Obituary & Service Information

The family of Mr. Gilbert W. Meier created this Life Tributes page to make it easy to share your memories.

Gilbert W. Meier died in Austin, TX in the early hours of April...

Send flowers to the Meier family.