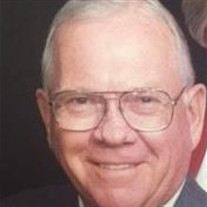 Harold [Hal] Wilson Anway, Jr., 93, passed away peacefully May 3, 2019 surrounded by his family. He was born on December 21, 1925 in Ames, Iowa to Harold Anway, Sr and Wilma [nee Dennis] Anway, who preceded him in death. He graduated from Iowa State University with a BS in Chemical Engineering, and served his country faithfully in the United States Army during WWII, and somewhere in there he found time to make his girlfriend, Patricia Rodman, Mrs. Anway. At the age of 25, Hal joined Monsanto's Organic Chemicals Division as a sales trainee; in 1969 he was appointed as manager of Management/Marketing Development and was instrumental developing the curriculum that would be taught to new hires and was one of only two Monsanto instructors fully accredited to teach it, serving in Cleveland, Kansas City, San Francisco, New York and St Louis, while remaining the Director of Training and Development until he retired from Monsanto in 1983. The very next day, after his retirement from Monsanto he was named Director of Training for Petrolite Corporation. Hal had broad interests in everything from Rotary International, reading, sailing, golfing, flying his own plane, telling good [and bad] jokes, but, most of all he loved his growing family. Survivors include his wife of 71 years: Patricia; three children: Susan Buehring, Steven Anway [Shelly], Harold [Tripp] Anway, III [Debbie]; eight grandchildren; six great grandchildren; and one sister: Kay Crawford. Visitation will be held Thursday morning May 9 from 10-12 at Valhalla Chapel of Memories, with Memorial Services at 12 noon, followed by Full Military Honors. Inurnment is private at Valhalla's Indoor Mausoleum. Memorial contributions may be left in his honor to the Rotary Foundation.

Harold [Hal] Wilson Anway, Jr., 93, passed away peacefully May 3, 2019 surrounded by his family. He was born on December 21, 1925 in Ames, Iowa to Harold Anway, Sr and Wilma [nee Dennis] Anway, who preceded him in death. He graduated... View Obituary & Service Information

The family of Mr. Harold [Hal] W. Anway Jr. created this Life Tributes page to make it easy to share your memories.

Send flowers to the Anway family.