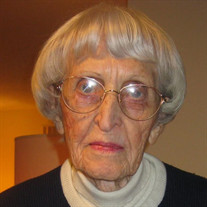 Helen E Fowler of Chesterfield, MO passed away on Sunday, September 1, 2019, at age 97. Helen Stanley was born in Ripley County, MO on January 10, 1922 to Gordon Cleveland Stanley and Ava Barnes Stanley. She taught school two years in Ripley County. Helen married Thomas Rex Fowler Jr. on June 1, 1941 and began 65 interesting exciting years together. They lived numerous places, including several years in oil camps in Sumatra, Indonesia and made several Indonesian friends. Both Helen and Rex were avid golfers and often won mixed events together. Both played in the Indonesian open in Djakarta in 1962. In retirement, they lived several years in Sun City Center, Florida, and had many happy memories of Caloosa Golf Club, Trinity Baptist Church and various other groups. In 2003, they returned to St. Louis for their remaining years. Helen is survived by: Her sister Anice Lee Wells, her brother Carlton Stanley (Nell), several nieces, nephews, and cousins. Helen was preceded in death by her parents, brothers, in-laws, a niece, and two nephews. At her request, there will be no service. To celebrate her life, please donate to: Doniphan Library 207 Locust Street Doniphan MO 63935.

The family of Helen E. Fowler created this Life Tributes page to make it easy to share your memories.

Send flowers to the Fowler family.