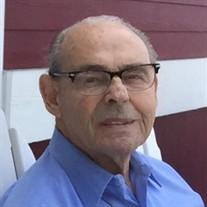 Henry J. "Hank" Mayhall, 95 of Ballwin, Missouri, passed away, Wednesday, March 27, 2019 at St. Lukes Hospital. A celebration of life memorial gathering will be held at 11:00 am Saturday April 6th at Bellerive Gardens Cemetery Mausoleum, Visitation from 10-11 am 740 North Mason Road, St. Louis, MO 63141. Hank was born August 23, 1923 in Chautauqua, Illinois to James Henry and Laura (Brown) Mayhall. He joined the Navy in 1942 and transitioned to the Army's 88th infantry, serving as an advance Scout. He was a POW, twice escaping before being liberated by the Allies in 1945. He married the former Mary Alyce Shellabarger of Davenport, Iowa on February 7, 1947. Hank was employed in the women's shoe industry his entire career, traveling domestically and internationally in the production of stylish, high-quality ladies shoes. He very much enjoyed his work and continued it well into his 70's. Hank is survived by his two sons, Henry J. Mayhall III of Manchester, Missouri, and Richard A. Mayhall of Kirkwood, Missouri, three grandchildren: Henry J. Mayhall IV of Houston, Texas, Taylor A. Mayhall of Rockville, Maryland, and David G. Mayhall of Minneapolis, Minnesota, as well as several nieces and nephews. He was preceded in death by his wife Mary Alyce in 2003. Memorial contributions to the Diabetes Foundation. www.valhallafunerals.net “V”

The family of Mr. Henry J."Hank" Mayhall created this Life Tributes page to make it easy to share your memories.

Send flowers to the Mayhall family.