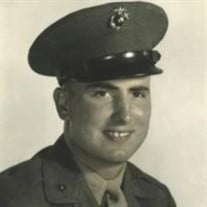 U.S. Veteran Herschel “Joe” Emery Singer, Jr. Herschel Emery Singer, Jr., known to most as Joe, age 89, a resident of Chillicothe, Missouri, passed away on Tuesday, March 3, 2020, at Hedrick Medical Center, Chillicothe, Missouri. Joe was born to Herschel Emery and Lena Bessie (Christensen) Singer on December 4, 1930, in Chardon, Kansas. At an early age he was nicknamed “Joe” by his aunt, and went by that name throughout his lifetime. He moved with his parents to Hale, Missouri, at the age of 4. He graduated from Hale High School in May of 1948. On September 24, 1949, he married Dorothy Foltz. They were the parents of three sons: Randall Joe, Sunset Hills, Missouri, Ronald Jay, who passed away in 2019, and Gail Eugene, who died at birth. Joe managed the Hale Locker Plant for Walter Ratcliffe from September of 1950 until March of 1952, when he was called to serve in the United States Marine Corps. He was a Corporal in the 3rd Marines 3rd Division from 1952 until March of 1954. He took boot camp in San Diego, California, and was stationed at Camp Pendleton, California, Kaneohe Bay, Hawaii, and Camp Fujiyama, Japan. He received the United Nations Service Medal, National Defense Service Medal, and the Korean Service Medal. When he returned from service, he worked as a chemical mixer for Vet Products in Kansas City. On July 15, 1954, he and Dorothy purchased the Chillicothe Locker Storage from his former employer, Walter Ratcliffe. They added the Singer Abattoir in 1959, and in 1965, they built a new plant and named it Singer Locker Service and continued in that business until April 1, 2015, when they retired. He also was a substitute rural mail carrier for 13 years, and was a member of the State and National Rural Letter Carriers Association during that time. Joe joined the Missouri Association of Meat Processors in 1955, and was a director at large, district director, 1st Vice President and President of that organization. He was a member of the American Association of Meat Processors from 1954 until 2016. He served 15 years in the advisory capacity of the National Locker and Provisioning Magazine located in St. Louis. He was inducted into the Missouri Association of Meat Processors Hall of Fame in 1989. Joe was a member of Central School PTA for 10 years, and served one year as President. He was a member of the Chillicothe R-II School Board for 9 years, and served as Treasurer, Vice President, and for 2 years as President. He was made an Honorary Chapter Farmer in FFA in April 1975 for outstanding contributions to Agriculture. From 1984 to 2015, Joe and Dorothy gave the Singer Locker Award to three 1st year FFA students by paying their way to the State FFA Camp. For many years, they gave a 4-H Service Award to extension clubs and contributed to the 4-H and FFA associations. Joe was a member of the Chillicothe Church of Christ and was an active lay member and Sunday School Teacher for 54 years. He was a member of the Chillicothe Chamber of Commerce, a member of the Vern R. Glick American Legion Post #25 since 1966, a RSVP volunteer since 2001, and was a licensed funeral director. Joe received the Charlie Litton Outstanding Democrat Award in April of 2008. Survivors include his wife, Dorothy Singer of the home; one son, Randy Singer and wife Cindy of Sunset Hills, Missouri; daughter-in-law, Cindy Singer of Utica, Missouri; three grandchildren, Robert Singer and wife Erin of Chillicothe, Missouri, Michael Singer and wife Terri of Chillicothe, Missouri, and Ashley Singer-Falkner and husband Gary of Sunset Hills, Missouri; one step grandson, Shawn O’Brien and wife Becca of Trenton, Missouri; two great grandchildren, Emerald and Mason Singer; one step great grandson, Joshua Watterson; one brother, Wilbur Singer and wife Margaret of Chillicothe, Missouri; and one sister, Shirley Silvernail of Indian Land, South Carolina. He was preceded in death by his parents; two sons, Gail Eugene and Ronald Jay Singer; two brothers, Bill Singer and Jack Singer; and one sister, Priscilla Watt. Funeral services will be held at the Lindley Funeral Home, Chillicothe, Missouri, on Saturday, March 7, 2020, at 11:00 a.m. A scheduled visitation will be held at the Lindley Funeral Home, Chillicothe, Missouri, on Saturday, March 7, 2020, one hour prior to the service at 10:00 a.m. until 11:00 a.m. Friends may call at the Lindley Funeral Home, Chillicothe, Missouri, on Friday, March 6, 2020, from 9:00 a.m. until 6:00 p.m. Burial will be held at Hale Cemetery, Hale, Missouri. Memorial contributions may be made to Operation Help and/or the Grand River Multi-Purpose Center and/or Church of Christ and may be left at or mailed to Lindley Funeral Home, P.O. Box 47, Chillicothe, Missouri 64601. Online condolences may be made at www.lindleyfuneralhomes.com. Arrangements are under the direction of Lindley Funeral Home, Chillicothe, Missouri.

The family of Herschel "Joe" E. Singer Jr. created this Life Tributes page to make it easy to share your memories.

Send flowers to the Singer family.