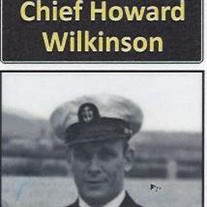 Chief Howard Wilkinson enlisted in the navy on April 2, 1940 for a 6 year term USS WASP [CV7]; The USS WASP was a reduced size version [688 foot long, 14,700 ton] of TheYorktown-Class Carrier, manned by 2200 officers and men and could travel at 30 knots for 12,000 NMI. The USS WASP was launched with almost no armor, modest speed, and very little protection from torpedoes. Chief Wilkinson was assigned to the U55 Wasp (CV7) from Nov 1940 through Sept 1942 initially as a seaman and at the end of his tour as a 2nd Class Aviator Machinist Mate. The USS Wasp was deployed initially in the Atlantic Theatre from Nov 1940 to Dee 1941 assigned to Carrier Division 3. leaving Scotland, the USS Wasp sailed to the Virgin Islands (March 1941), Bermuda (May and June 1941) and was involved as part of Task Force 16 in support of the occupation of Iceland in Aug 1941. The USS Wasp was later deployed as part of Task Group 22.6 to Venezuela and Scotland IMarch 1942}, Malta and Mediterranean theatre (April-May 1942) and Norfolk (June 1942). The U55 Wasp joined the British Home Fleet in April 1942 and twice ferried British fighter aircraft to Malta. The U55 Wasp was then deployed under Vice Admiral Fletcher to thf'Pacilic Theatre In.Guadalcanal (Aug 1942) to replace losses at the battles of Coral Sea and Midway which left the Pacific Fleet with only three carriers. In the Coral Sea, the USS Wasp along with the earner USS Hornet, the battleship USS North Carolina and 10 other warships were assigned to estort transports carrying the 7th Marine Regiment to Guadalcanaf. After the recovery' of 11 planes at 14:44, a lookout reported "three torpedoes", Under the command of Captain Sherman and Rear Admiral leigh Noyes, the USS Wasp was sunk at 21:00 on Sept 15 1942 after a spread of six type 9S torpedoes were dispatched by a Japanese submarine (1.19) resulting in the loss of 193 men and 366 wounded. USS Belleau Wood (CVL24): The USS Belleau Wood was a US Navy Independence-class aircraft carrier during WWII(622 ft long and 11,000 long tons), manned by 1570 officers and men, carried 32-45 planes and could travel at nearly 32 knots. Chief Wilkinson was stationed on the Belleau Wood between Jan 15 1943 through June 1 1944 initially as a 1st Class Aviation Machinist and before the end of his tour (Feb 11944) he WaS promoted to Chief Aviation Boatswain's Mate and Flight Deck Chief. Chief Wilkinson arrived in Philadelphia in Dec 1943 while the USS Belleau Wood was on pre-commission detail. After being c:ommissioned in June 19~3, the USS Belteau Wood traveled from Philadelphia to Pearl Harbor (July 26 1943) under the command of Captain Pride (later Admiral Pride and inventor of the arresting gear). After supporting the occupation of Baker Island (Sept 1 1943) and taking part in the Tarawa (Sept 18) and Wake Island (October 5-6) raids, the USS Belleau Woods joined the TF 50.2 task group for the strikes at Makin Island and invasion of the Gilbert Islands (Nov 19 - Dee 4 1943). The USS Belleau Wood was also part of TG 50.3 for strikes on the Marshall Islands and also with TF 58 which participated in the following: seizure of Kwajalein and Majuro Atolls, Marshall Islands (Jan 29 - Feb 3 1944), Truk Raid (Feb 16-17), Saipan-Tinian-Rota-Guam Raids (Feb 21-22), Palau-Yap-ulithi-Woleai raid (March 30 - April 1), Sawar and Wakde Island raids in support of the landings at HolI.ndi. (J.y.pura), New-Guinea (April 22-24) and 'rruk-Satawan-Ponape raids (April 29 - May I). In June 1944, Chief Wilkinson was reassigned and returned stateside. Catapult and Arresting School Assignment: Chief Wilkinson was transferred in June 1944 to Catapult and Arresting Gear School and stayed there as a leading Chief instructor until his enlistment expired in 1946. Chief Wilkinson was discharged at Jefferson Barracks in April 2 1946. Although Chief Aviation Boatswain's Wilkinson did not reenlist, he opted to stay in the Reserves. Korean War Assignment: Chief Wilkinson was recalled for the Korean War in June 1950 and was stationed in Adak Alaska from Oct 1950 to Feb 1952. Chief Wilkinson was discharged in Seattle in march 1952 and did not re-enlist in the reserves. Citations: Good Conduct Medal, Presidential Unit Citation. Survived by one sister: Mary Alice Piestrup; a nephew: Bill [Carole] Griese, a niece: Karen [Bill] Craft; a nephew: Art [June] Sherman; and another niece: Ann Schubert. He was godfather to Geoffrey Simril and Nancy Spencer. Memorial Service will be Thursday, Oct 1 at Bellerive Mausoleum Chapel at 10:30 am followed by Full Military Honors. Memorial contributions to the Missouri Botanical Garden.

Chief Howard Wilkinson enlisted in the navy on April 2, 1940 for a 6 year term USS WASP [CV7]; The USS WASP was a reduced size version [688 foot long, 14,700 ton] of TheYorktown-Class Carrier, manned by 2200 officers and men and could travel... View Obituary & Service Information

The family of Chief Howard J. Wilkinson Jr. created this Life Tributes page to make it easy to share your memories.

Send flowers to the Wilkinson family.