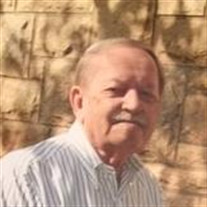 Jack "The Barber" Widener, passed away March 24,2019 surrounded by his family. He was born June 1, 1932 in Hollywood, California to Fred and Mae [nee Williams] Widener. Jack served his country in the United States Army. He married Alice Alderson in 1952 and to this union three children were born: Connie McKelvey, Brian [Barbie] Widener, and Craig [Michelle] Widener. Also surviving are eight grandchildren: Brendan [Mary] McKelvey, Collin [Kelly] McKelvey, Keeley Mckelvey, Cameron McKelvey, Jessica [Steven] Andrews, Megan Widener, Anna [Jake] Roeder, and Adam Widener; along with five great grandchildren: Patrick, Henry, William, Hunter, and Ian. Jack was a well known barber in St Louis located at Olive and Warson, but most famously at Creve Coeur Plaza, who often left his shop and went to nursing homes and private homes to give haircuts to those in need. A faithful member of the Creve Coeur Lions Club, he also equally enjoyed a round of golf or just completing a crossword puzzle, going fishing, bowling, an avid reader, and enjoyed sports with his boys. He was an enthusiastic traveler and took many trips with his beloved wife Alice throughout their marriage. When he was no longer able to comfortably travel long distances, he devotedly read his travel magazines. He happily reminisced about his travels to Mexico and Europe when surrounded by his loved ones in his final days. A very special thank you to the staff and caregivers at de Greef Hospice House. Visitation will be held from 10-11 am at Bellerive Gardens Mausoleum, 740 N Mason Rd, Creve Coeur, 63141 on Thursday, March 28, 2019, followed by Memorial Services at 11 am with Full Military Honors. Interment is private. Memorial contributions to the Christ Prince of Peace Catholic Church.

Jack "The Barber" Widener, passed away March 24,2019 surrounded by his family. He was born June 1, 1932 in Hollywood, California to Fred and Mae [nee Williams] Widener. Jack served his country in the United States Army. He married Alice... View Obituary & Service Information

The family of Mr. Jack "The Barber" Widener created this Life Tributes page to make it easy to share your memories.

Send flowers to the Widener family.