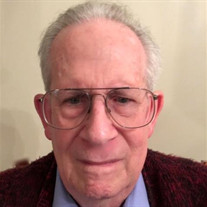 James W. Owen, Jr. (Age 83) James “Jim” Woodland Owen, Jr., Technologist, passed away on July 16, 2017, at the age of 83 due to complications from pancreatic cancer. He was attended and comforted by family and friends. Jim was born in Lebanon, Missouri, on May 14, 1934, to James W. Owen, Sr. and Allene S. Haynes Owen. He had one brother, Thomas Haynes Owen. He graduated from Lebanon High School in 1954 and from the Missouri School of Mines (Missouri Science & Technology) in 1958 with a Bachelor of Science Degree in Physics and a Commission as a Second Lieutenant in the Army Corps of Engineers. He was stationed in Ft. Belvoir, Virginia, in 1958 at the Engineer Research and Development Laboratories (ERDL). Jim also served in the United States Army Reserve for 17 ½ years rising to the rank of Captain. After 2 ½ years as a First Lieutenant, Jim was offered a civil service job at ERDL as a Physicist and an Electronics Engineer. Much of his job included writing technical reports and instruction manuals, contract specifications, and military standards and budgets. However, Jim had many opportunities for original development of solutions for the practical problems of the Army. This included work on the Global Position System (GPS) and Multiple Concealed Intrusion Detection (MCID) which he personally deployed in the DMZ to catch spies infiltrating into South Korea in 1965. Jim returned in 1976 supervising a project of tunnel detection under the DMZ by the North Koreans. He deployed MCID sensor technology during the Vietnam War and around the White House and Camp David to protect the President. In the later part of Jim’s career he served as the Director of the Countermine Systems Directorate. Because of his work as the principle member of the Project Office for Physical Security Equipment for the 1980 Winter Olympics in Lake Placid, New York, Jim received the Department of the Army Commander’s Award for Civilian Service. Jim oversaw the design and planning for the installation of the security system for the Prince of Saudi Arabia’s palace. He worked at the ERDL until his retirement in August 1996 after 39 ½ years of federal service. Jim enjoyed sharing his rich memories in writing, extensively researching family history, reading war novels and working on his computer. At his retirement community, he was a member of the comedy, photography, and writing clubs. He additionally served on the Safety, Emergency Preparedness and Technical committees. For many years, Jim also served on the advisory committee for planning of Prince William County. Jim was a charter member of the Grace Lutheran Church in Woodbridge, Virginia, and served in several positions over the many years. He loved being with his family, especially his grandchildren. Jim is survived by his wife, Rosemarie Owen; three sons, Michael V. Owen and his wife Glenda of Glenelg, Maryland, Steve W. Owen and Shelby Gochenour of Falls Church, Virginia, Gary D. Owen and his wife Pam of St. James, Missouri; one daughter, Renee J. Berkley; six grandchildren, Cassandra, Kristen, Loxleigh, Michael, Matthew and Marshall; and one great grandson, Riley. He was preceded in death by his parents and brother. Donations in lieu of flowers can be made to the Pancreatic Cancer Action Network in Manhattan Beach, CA.

The family of Mr. James Woodland Owen Jr. created this Life Tributes page to make it easy to share your memories.

Send flowers to the Owen family.