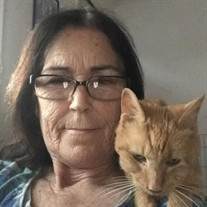 Renea was born in St Louis, Missouri to Bobbie Joe and Wyanette Gay [nee Dawson] Turner. She died in St Louis on February 7, 2021 surrounded by her family. She was fond of old movies, a nice cup of tea, the pristine beaches in Florida, Margaritas at sunset, she loved animals of all kinds; but mostly she loved being with her grandchildren and introducing them to nature. Survivors include four children: Rachel Garry, Cody Thornhill, and twins, Sage and Matthew Thornhill; four grandchildren: James, Bub, Joey, and Jacob; one sister: Debi [Ron] Lovelace; one niece: Deanna Werner; and her dearest friend Beverly. She was preceded in death by her parents; her brother: Rodney; and the love of her life Don Ginocchio. **************************************************************************************************** In lieu of flowers, please read this: January 6th 2021 Renea devastatingly was diagnosed with advanced Stage 4 Cancer. Sadly after weeks of going back and fourth from hospitals to home she was diagnosed with Crohn’s disease. After many treatments and things not getting better the Doctors decided to do an exploratory surgery, when the cancer was found. After getting the news and the initial shock, Renea just wanted to get home to spend her remaining months with her animals and family. Anyone who new Renea knew she put animals above all. She would pass on a meal for herself to provide one for an animal in need. Renea had the biggest heart for all animals, the smile on her face when she would interact with them is something all of us close to her will never forget. Her joy in life (other then animals ☺) was her grandson, James, their time together and all the activites they did together. When this devastating news was brought to James about his "Nonnie" he came up with the idea of a Memorial Rock at the Saint Louis Zoo. They use to stop and look at it every time they took a trip to the Zoo. James took his idea to his Nonnie on one of his visits and she was able to "clear as day" say how much she loved that idea. This week, Renea lost her battle and God gained an angel. She was able to be home for 2 weeks and share that time with her animals, family and friends. We in the family are hoping with everyone's help even if its $1.00 it will help reach our goal. Anything that is raised here will be strictly for the purchase of the stones/rocks at the Zoo. We, the family, will be buying the 8x8 Granite Brick with animals etching and we are hoping to raise enough to buy the surrounding stones and put sayings Renea would love to hear or say. Anytime any of you are at the Zoo you could pause at the rock and have a fond memory of Renea.. Attached is a link of the information on the stones/rocks at the Zoo and the reason for James picking this is for his Nonnie's love of animals because all the money that the zoo gets for a stone will support their conservation efforts both at the Zoo and around the world and also helps feeds the animals. https://gofund.me/e8c6540e

Renea was born in St Louis, Missouri to Bobbie Joe and Wyanette Gay [nee Dawson] Turner. She died in St Louis on February 7, 2021 surrounded by her family. She was fond of old movies, a nice cup of tea, the pristine beaches in Florida, Margaritas... View Obituary & Service Information

The family of Janet "Renea" Turner created this Life Tributes page to make it easy to share your memories.

Renea was born in St Louis, Missouri to Bobbie Joe and Wyanette...

Send flowers to the Turner family.