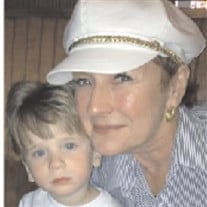 Janice Lorraine Amos, (Micki), born April 24th 1947, went to be with her Lord and Savior Jesus Christ at 11:58 pm on the 23rd of September, 2019 after a long and courageous battle with cancer. Wife of James H. Amos Jr. for 53 years and mother... View Obituary & Service Information

The family of Janice [Micki] Lorraine Amos created this Life Tributes page to make it easy to share your memories.

Send flowers to the Amos family.