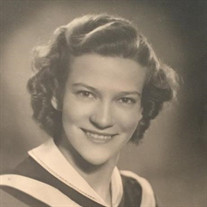 June 22, 1917 – April 29, 2017 It is with great sadness that we announce the death of Jean H. Thurston, M.D., who passed away peacefully on April 29, 2017, in St. Louis, Missouri, two months short of her 100th birthday. Jean was predeceased by her late husband, Dr. Donald Thurston as well as her three brothers: Walter, Ambrose and Sylvester Holowach, as well as two sisters: Mary Yaholnitsky (Holowach) and Olga Klink (Holowach). She leaves behind her niece, Karen Mollerson (Nels), and grand nieces Mary and Samantha (Stephen), together with nieces Sandra Yaholnitsky, Kate Holowach, and Salena Angell, all of Canada. She is also survived by her nieces, Adrienne Thurston, Janet Hernandez, Julie Donaghy and Sally Thurston, all of the United States. Jean was born in Edmonton, Alberta, the youngest daughter of Samuel and Josephine Holowach. She excelled at school and earned her M.D. in 1941 from the University of Alberta in Edmonton, Alberta. From 1942-45 she practiced Pediatrics in Calgary before coming to Washington University in St. Louis School of Medicine to begin a fellowship in Pediatrics (Metabolism) from 1945-47. She returned to practice Pediatrics in Edmonton from 1947-49, before permanently moving to St. Louis after her marriage to Don. In 1949, Jean was appointed to the faculty of the Department of Pediatrics at Washington University in St. Louis School of Medicine. She served as an instructor until 1954 when she was promoted to Assistant Professor of Pediatrics. Dr. Thurston served as Director for the State of Missouri Premature Program from 1949-1961 and was Director of the Pediatric Convulsive Clinic from 1950-62. Her clinical work set standards for pediatric epilepsy research and her knowledge of brain metabolism and neurochemistry was legendary, serving as the basis for many influential papers on childhood metabolic disorders. From 1962-65, Dr. Thurston completed a neurochemistry fellowship with Oliver Lowry and then returned to the Department of Pediatrics to run her own laboratory in neurochemistry. Ever a lifetime learner she continued her bench research until 1995, publishing her last original full paper at age 78. Jean brought happiness to many and she leaves us with joy and gratitude. Dr. Jean was also a dedicated opera buff, an avid gardener and a fantastic cook. As well, she loved adventure, travel, nature, golf and enjoying life to the fullest every day. Jean was a loving wife and aunt, an amazing friend and mentor, a brilliant researcher and an exceptional doctor. She lived her life with integrity, kindness and respect. Dr. Thurston was passionate about her work, had a feisty spirit and an intellectual curiosity that will not be forgotten. Jean continued to make weekly visits to her much beloved St. Louis Children’s Hospital into her 99th year! Ever an advocate and mentor for younger colleagues, she made extraordinary efforts to facilitate junior research careers. In recognition of her dedication and assistance, Dr. Thurston received the Formen-Peterson Founders Award from the Midwest Society for Pediatric Research in 1990. For the substantial contributions she made to the field of child neurology, Dr. Thurston was awarded the first “life-time achievement award” by the Child Neurology Society in 2004. Her spirit and intellectual curiosity will be cherished forever. Dr. Thurston will be greatly missed by her family, colleagues and wonderful friends. Her passing leaves a void that will be impossible to fill. We would like to thank Dr. Anne Connolly, Dr. Steve Rothman, Dr. Chris Gurnett, Dr. John Zempel, and Dr. Ed Dodson who provided so much support to Jean over many years. We also thank Richard Hauhart, senior research technician who worked with Dr. Jean for over 21 years as well as friend Cindy Marr. The family also wishes to thank Elaine, Darla, Lisa, Annette, Rachelle, Delaina, Yolanda, Marietta, Mary Ann and many other wonderful and compassionate staff at The Gatesworth Extended Care. At Dr. Thurston’s request there will be no funeral services. If friends so desire, memorial donations in Dr. Jean Thurston’s name may be made directly to Washington University in St. Louis School of Medicine, Department of Pediatric Neurology.

The family of Jean [Holowach] Thurston M.D. created this Life Tributes page to make it easy to share your memories.

Send flowers to the Thurston family.