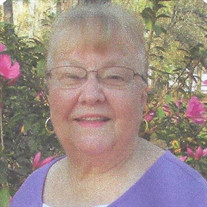 Joan Virginia Lorenz was born into this world on October 2, 1939 in St. Louis, MO, to Howard and Florence Hilsabeck, their fourth child and only daughter. She departed this earthly life in Jacksonville, FL on Tuesday, March 27th, 2018, to enter the realms of glory made possible through her faith in the birth, death and resurrection of her Lord and Savior, Jesus Christ, Who loved her and gave Himself for her. This Jesus she served with her whole heart, fulfilling the mandate of her Lord to offer a life of service to others, and in so doing, serve Him. (Matt. 25:40) Many were the recipients of Joan’s life of loving service; most notably, her husband, Dave, her four children, Dena, Daniel, Amy and Timothy, their spouses Tim, Jane, Brian and Barbara respectively, and her fifteen + grandchildren, but extending to countless others as she enriched their lives as teacher, mentor and friend. Joan’s lifelong desire to share her faith was demonstrated early on as she used her leadership (first female student body president in Ritenour High School history) and debate team skills to challenge unscriptural concepts masquerading as truth in public schools then and now. Training for her calling as a Christian school teacher began at St. John’s College in Winfield, KS, a two year college where she met and later married her husband of fifty-seven years, Dave Lorenz. The college’s class of ‘59 was the last to graduate “Johnnie Wonders” who were able to teach in Lutheran Church - Missouri Synod schools with an “AA” Degree. She first taught third grade for two years in Pueblo, CO, Dave’s home state, while he completed his B.S. in Ed. Degree at Concordia Teacher’s College, Seward, NE, in June of 1961. Married that same summer, the couple agreed to accept a foreign call to serve Highland Lutheran School for the children of missionaries serving New Guinea Lutheran Mission in the Western Highlands of Papua New Guinea. During their tenure at HLS (1961 – 1975) Joan became crack filler in chief, everything from teaching piano lessons to stepping in for furloughing house parents at the dorm. Along the way, she performed her most cherished duty as wife and mother by birthing and nurturing four wonderful children. Not willing to send their eldest daughter off to boarding school in Australia at the tender age of twelve, Joan’s family returned stateside in January of 1975 to undertake a new season of Kingdom service. The founding of Christian Outreach Day School in Hillsboro, MO, afforded Joan the opportunity to expand her teaching gifts to the secondary level. Though her B.S. in Ed major (earned at CTC, Seward during furlough in 1971) was English, her first love at the high school level was teaching history where she instilled Christ-centered convictions and a Bible-based, politically conservative world view in her students. She often referred to her years at CODS as the most fulfilling as a Christian school educator. Following a six-month sabbatical teaching English as a foreign language at the Veronezh Pedagogical Institute in Veronezh, Russia, where she took full advantage of post USSR openness to sharing the Gospel, Joan continued her teaching ministry in Seattle, WA, in 1993. There she and Dave joined two of their children who were already teaching at Christian Faith School. After teaching high school English and history there for three year, she tried her hand at earning a nursing degree in an effort to prepare herself for ministering to her husband who was dealing with major health issues at that time. However, as Dave’s health improved, it became increasingly clear that her calling was in the Christian school arena, leading to a five year commitment to teach third grade at Shorewood Christian School where her son, Tim, was principal. Her retirement from teaching in 2007 was short lived as she substitute taught another five years in Duval County public schools, having moved to Jacksonville, FL, with her husband to live with their daughter Amy’s family. Again, as in Veronezh, she was presented with an opportunity to share her faith with many students in the public school system. Joan is survived by her husband, David Lorenz, her four children, Dena (Tim) Stromstad, Daniel (Jane) Lorenz, Amy (Brian) Hunt, Tim (Barb) Lorenz; brothers, Howard Hilsabeck, Ron (Judy) Hilsabeck; and sixteen grandchildren. “For to me to live is Christ, And to die is gain.” (Philippians 1:21)

Joan Virginia Lorenz was born into this world on October 2, 1939 in St. Louis, MO, to Howard and Florence Hilsabeck, their fourth child and only daughter. She departed this earthly life in Jacksonville, FL on Tuesday, March 27th, 2018, to... View Obituary & Service Information

The family of Mrs. Joan Virginia Lorenz created this Life Tributes page to make it easy to share your memories.

Joan Virginia Lorenz
was born into this world on October 2,...

Send flowers to the Lorenz family.