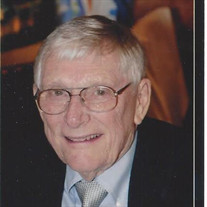 John Lewis Walther, 82, of Lake St. Louis, MO, died June 4, 2016, from bladder cancer. In his final months he was lovingly cared for by the staff of NHC St. Charles. Visitation will be held from 10-11 a.m. on Saturday, June 18, at the Wentzville United Methodist Church with a memorial service at 11 a.m. Private inurnment at Valhalla Mausoleum. John was born January 1, 1934, in Highland, IL to Verna and Lester Walther. He was the eldest of three children. John graduated Highland High School in 1951. He met Diane, also from Highland, the summer after his junior year of college while managing the Highland swimming pool. John graduated from SIU-Carbondale with a B.S. in 1955. The couple married June 21, 1958, and moved to Godfrey, IL. John worked in industrial engineering at McDonnell Aircraft, at Olin Brass Mills, and spent the final 30+ years of his professional career at McDonnell Douglas where he managed building projects for contract design and construction. John and Diane had a very active life, visiting kids and grandkids, attending United Methodist Church, building carpentry projects around their home, racing sailboats and cruising on Lake St. Louis, and travelling around the country in their RV (Diane read books while John fished). At McDonnell Douglas, John had a nickname - Straight Arrow. John was not a fan of office politics, and when faced with an ethical conflict, he would not stay silent or bend the truth. That same integrity guided all his interactions. Straight Arrow is also fitting because it evokes Native American culture and history, which he studied. Like the Native Americans, John had a reverence for nature and the environment. He loved the big predators, especially wolves, and respected the role of every creature and plant in the ecosystem. He was most at peace casting a fly along a shady stream, hiking in the woods, or rambling the fields with his dog. John was a loving and patient father. He spent countless hours teaching his kids to ride bikes, baiting fish hooks, helping with homework, and sharing their interests and concerns. John’s memory is treasured by his wife of 58 years, Diane (nee Backus); three daughters, Lexie Walther O’Brien (Insley Stiles), Leah Haverstick (Darren), Amy Kidwell (David); four grandchildren, Aideen and Maeve O’Brien, Elise Haverstick, Jessie Kidwell; one brother, Glen Walther (Carol); one sister, Sandy Everett (Mark); sister-in-law Bonnie Gemmill (Terry); and several nieces and nephews: Kort Walther (Tammy), Greg Walther (Leigh), Kristin Merkins (Joel); Stephanie Dowdell (Rick); and Andrew, Mike, and Erin Gemmill. John was preceded in death by his parents and his beloved dogs: Corky, Pal, York, Daisy, Captain, Lucky, and Suri. Memorial contributions may be made to the Endangered Wolf Center in Eureka, MO or the Conservation Federation of Missouri, confedmo.org/donate. Leave your memories online at www.valhallafunerals.net/obituaries/

John Lewis Walther, 82, of Lake St. Louis, MO, died June 4, 2016, from bladder cancer. In his final months he was lovingly cared for by the staff of NHC St. Charles. Visitation will be held from 10-11 a.m. on Saturday, June 18, at the Wentzville... View Obituary & Service Information

The family of Mr. John L. Walther created this Life Tributes page to make it easy to share your memories.

Send flowers to the Walther family.