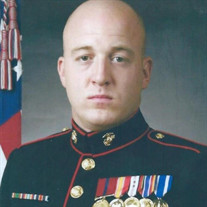 Joe was born and grew up in Florissant, Missouri. After graduating High School, he enlisted in the United States Marine Corps. He served for 12 proud years as a Marine, and the impact Joe had on “his” Marines will never die. In March of 2009 Joe hit the fleet and served with Marine Wing Support Squadron 272 based out of Marine Corps Air Station New River (“Pardon our Noise it’s the Sound of Freedom”). He deployed to Afghanistan in 2011 with MWSS - 272. He returned home in the advanced party from that deployment making it possible for him to witness the birth of his oldest son. In April 2012, he and his family PCS’ed to the island of Okinawa. While there, he was stationed on Marine Corps Air Station Futenma with Headquarters & Headquarters Squadron, part of Aircraft Recovery where he served as a crew leader and maintenance chief. During his three and half years on the island, he welcomed two more children into his family, loved the island life, fell in love with CoCo Ichibanya chicken cutlet curry level 10, and he even started wearing flip flops. After leaving Okinawa, he became a combat instructor. His time with the School of Infantry - East was the pride of his military career. He was a platoon commander, weapons primary instructor, and senior weapons instructor with Fox Company. He spent a short time at MCAS Cherry Point before joining his final unit Wounded Warrior Battalion - East. Besides the Corps, he loved driving a big, loud truck, riding his motorcycles, taking “short” off shore fishing trips on his boat, but most of all he loved being a dad. Joe was a fun dad who looked amazing in his “dad shorts”. He spent countless hours moving the vehicles out of the driveway so his kids and the all neighborhood kids could ride bikes, have nerf wars, color with chalk, and play safely under his supervision. He could be heard daily yelling at cars to slow down and was known to post signs stating just how terrible a driver and person you were for speeding through his neighborhood. Joe was the kind of friend every person deserves to have in their life. He helped more people move than can be counted: laid entire houses with flooring, built bunk beds, fixed transmissions, changed every flat tire he saw in a parking lot or side of the road when the motorist looked like they needed help, made so many house calls to check on friends when things were getting too hard for them, carried food in his truck to give away, paid for the drink of the person behind him in the Starbucks drive-thru, and thousands of other small acts of kindness for his friends and those around him. He will be missed. He leaves behind his wife, Abby [nee Hogan] Souders; his Parents: Sue and John Burnham; three children: Hank, June and Waylon; two sisters: Rachel [Joe] Kampelman and Katie [Andy] Keeven; Father and mother-in-law: Ron and Amy Hogan; sister-in-law: Melissa [Bob] Crowley; and brothers-in-law: Matthew, Ben [Laura], Luke, and Riley Hogan. Step-sisters: Christy, Sarah, Emily. Uncle to: Patrick; Rosemary and Baby Boy Keeven; Lorelei, Lalya and Leo; Griffin; Alexander; Alyssa; Layla; and Aria. Memorial contributions may be left to the: Warrior Clan Inc Https://warriorclan.org/donations Warrior Clan Inc PO Box 8 Hazelwood, NC 28738 Services are private at Valhalla Chapel of Memories. Interment will be a later date at Jefferson Barracks National Cemetery with Full Military Honors.

Joe was born and grew up in Florissant, Missouri. After graduating High School, he enlisted in the United States Marine Corps. He served for 12 proud years as a Marine, and the impact Joe had on &#8220;his&#8221; Marines will never die. In... View Obituary & Service Information

The family of Joseph "Joe" Souders created this Life Tributes page to make it easy to share your memories.

Joe was born and grew up in Florissant, Missouri. After graduating...

Send flowers to the Souders family.