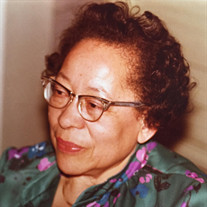 Clara Lolita Roberts Abernathy Obituary Clara Lolita Roberts Abernathy (from her earliest years, known as Lolita) was born on December 10, 1915, in Tulsa, Oklahoma. She was the first of two daughters born to James Henry Roberts and Audia Mae Hoard Roberts. A few years after the birth of her sister, Evelyn Hoard Roberts, in November 1920, the Roberts family moved to St. Louis where they joined the First Baptist Church. Lolita, who since 1996 was stricken with Alzheimer’s disease, died on January 13, 2015. Lolita was educated in the St. Louis public school system, graduating from the Charles Sumner High School in June 1932. She received her diploma as a certified music teacher from the Kroger School of Music, St. Louis, in June 1935. She continued her formal education, matriculating at Stowe (now Harris Stowe) Teachers College in St. Louis, earning a Bachelor of Arts degree in January 1937. On March 23, 1943, Lolita married William John Abernathy. To their union, two sons were born, Wayne and Paul. A great sadness of her life was Wayne’s death in March 1995. In a little more than a year, her grief was intensified beyond measure with the death of her beloved husband, Bill, in April 1996. Lolita was an educator, devoting the whole of her vocational years to the St. Louis public school system as an elementary teacher, first, serving many years at the Carr Lane Elementary School and, later at the Carver and Wade Elementary Schools. The church was another major center of Lolita’s life and labor. At the First Baptist Church, she was a pianist and, after teaching herself to play the organ, became the youngest organist and choir accompanist. Shortly after her marriage to Bill, they joined All Saints’ Episcopal Church. Lolita possessed a warm and welcoming spirit. Although soft-spoken and self-effacing, she was quick of wit, with a charming smile and an engaging laugh. She was a gracious host and a grand chef, her kitchen being the origin of varied epicurean delights, her oven producing many a baked delectable treasure. She also was graced with a beautiful mezzo-soprano voice, suited, as she was wont to say – and so typical of her penchant for diffidence – for choral and not solo singing. Although her voice has been stilled, long before by disease and now death, the beauty of her life’s melody of love and laughter shall linger for all who truly knew and honored her for the remarkable human being she was. Surviving are her son, the Reverend Paul Roberts Abernathy, her daughter-in-law, Pontheolla Mack Abernathy, her granddaughter, Kristin Anne Abernathy, and a host of relatives and friends.

The family of Mrs. Lolita R. Abernathy created this Life Tributes page to make it easy to share your memories.

Send flowers to the Abernathy family.