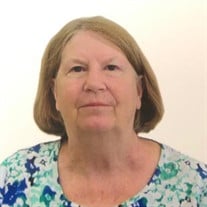 Lorraine, known as Lori to her loved ones and friends, was born in Chicago, Illinois, to Eugene Gustav Falck and Virginia Reed Falck. She grew up in Chicago and attended Bradley University in Peoria, Illinois. She majored in accounting and worked in the campus library, perhaps the first indication of her lifelong love of reading. At Bradley, she met Bob Depp and fell in love. They married after graduation, on June 6, 1970. The Depps settled in St. Louis, near Bob’s family. He joined the service and she worked in a variety of accounting positions, waiting patiently for his homecoming. Upon Bob’s return, he worked at McDonnell Douglas and they began their family. Lori took time off from accounting when their son Greg was born, and worked as a stay-at-home mother until their younger son Doug went to kindergarten. She enjoyed accounting positions in the savings-and-loan industry before joining Bob at McDonnell Douglas. Nearly 30 years later, she retired from Boeing, having enjoyed a long and steady career as a valued accounting team member in the governmental contracts division. She loved her boys, and fostered in them an interest in reading that mirrored her own. Thanks to her tutelage, her children were voracious readers before they entered school and she encouraged their growth by circumventing the “rules” of the school board. When the school and bookmobile librarians informed the boys that they were only allowed to read at their grade level despite their advanced abilities, she instructed them to find the books they really wanted on bookmobile day, note the titles, and bring their lists home. That night, she drove them to the public library and checked out everything they wanted to read. Lori encouraged her children to value education, and ensured they never missed a day of school. They were Boy Scouts, camping and hiking and exploring ropes courses all under the watchful eye of their father after Lori insisted he attend to ensure their safety. Both boys earned the rank of Eagle Scout, and credit their parents with their achievements. While books offered a routine escape into new worlds, Lori also liked to explore the world herself. She adored travel, and carefully planned family trips over spring breaks and summer vacations. From enjoying the beach in Destin, Florida to skiing in Colorado and exploring the Smoky Mountains, Lori found great joy in both planning her family’s vacations and then enjoying new experiences with them. She knew the spring and summer break schedules at least a year in advance, if not two, and there was always a vacation on the horizon. Later, when her family grew to include her daughter-in-law, Jen, Lori continued the tradition. By this time, she had discovered the joys of cruising. She and Bob explored a variety of ports themselves— including several on a European river cruise—and planned a family cruise for the five of them each year. For their 35th anniversary, Bob surprised her with a dream vacation to Hawaii. When she wasn’t on the road (or the ocean), Lori also enjoyed gardening. Lori Depp loved deeply and was deeply loved. She will be missed. Survivors include her husband Bob, sons Greg (Jen) Depp and Doug Depp, brother Glen (Teresa) Gustavson-Falck of California, and mother-in-law, Louise Depp of North Carolina. Services are private at Valhalla. Memorial contributions may be made to the First Step Back Home at http://firststepbackhome.net

Lorraine, known as Lori to her loved ones and friends, was born in Chicago, Illinois, to Eugene Gustav Falck and Virginia Reed Falck. She grew up in Chicago and attended Bradley University in Peoria, Illinois. She majored in accounting and... View Obituary & Service Information

The family of Lorraine R. Depp created this Life Tributes page to make it easy to share your memories.

Lorraine, known as Lori to her loved ones and friends, was born...

Send flowers to the Depp family.