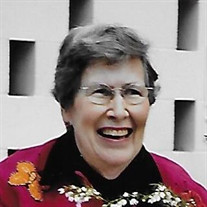 Margaret "Peggy" Moehlenbrock Margaret "Peggy" Payne Moehlenbrock was born on January 9, 1930 in St. Louis to Maurice A. Payne and Alice Tebbetts Payne. She was close to her only sibling, Maurice A. Payne, Jr. Peggy attended Washington University, where she was a member of. the swim team and Kappa Alpha Theta. Her Theta big sister was Margaret "Maggie" Moehlenbrock, who introduced Peggy to her big brother, W. E. "Bill" Moehlenbrock, Jr. Peggy and Bill were engaged on Valentine's Day 1950 and were married the following August. Peggy and Bill lived in St. Louis, then Oklahoma City for 5 years and then returned to rural west St. Louis County (then Chesterfield, now Wildwood). They had four sons: Edwin, Andrew, David and Todd. They enjoyed gath~rings with friends, boating trips on the Mississippi River, canoe trips and trips to Central and South America where Bill and Todd went scuba diving. Thanksgiving was a favorite holiday. For many years it was celebrated in Overland Park, Kansas with the Killmar family and later in Oklahoma City. They also enjoyed fun family reunions at Wilderness Lodge on the Black River near Lesterville, Missouri and other Ozark locations and Easter gatherings in St. Louis. Peggy loved her extended family and the many close friends she had. She was an excellent cook and gardener. Peggy worked in the housewares department of Dillards for 16 years. After her retirement she volunteered for 17 years at the Butterfly House. She moved to Friendship Village in 2009 and enjoyed her time there. Her parents, husband and brother predeceased her. She is survived by Edwin, of Oklahoma City, Oklahoma, his wife, Carrie, their sons, Scott and Clark and Scott's wife, Katylee; Andrew, of Simpsonsville, South Carolina, his wife, Maxine, their children, Cheryl and Chelsea, and Cheryl's husband, Mike Caston, and their children, Theodore, Isabelle and Abigail; David, of Mountain View, Missouri, his wife, Susan, and their children, Lucas and Leah; and Todd, of Oklahoma City, his wife, D'Ann, and their children, Peyton, Jacob and John and Peyton's husband, Kyle. A memorial service will be held at Friendship Village on Saturday, April 15 at 1 :30 p.m. In lieu of flowers the family requests that any contributions be made to the Butterfly House (Missouri Botanical Garden) or The Salvation Army.

The family of Mrs Margaret "Peggy" Moehlenbrock created this Life Tributes page to make it easy to share your memories.

Send flowers to the Moehlenbrock family.