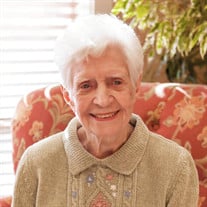 Margaret Jane “Jeanie” Strong (nee Wagoner), 97, passed away January 30, 2022, at Guardian Angel Homes Assisted Living in Post Falls, Idaho, three weeks shy of her 98th birthday. Mrs. Strong was the only child of Earl P. and Mildred E. (Steele) Wagoner, born February 18, 1924, St. Louis, Missouri. A year after graduating from Brentwood High School, she married 2nd Lieutenant Murray D. Strong, AAF, on June 3, 1943, prior to his overseas deployment during World War II. Murray preceded her in death on April 13, 2013, in Columbia, Missouri. She and Murray were long-time residents of Columbia where he was Tennis Coach at the University of Missouri after earning bachelor’s (1966) and master’s (1968) degrees in physical education following retirement from the US Air Force in 1962. In their 70 years together, Jeanie and Murray traveled the country and the world to visit far-flung family and friends, to participate in military reunions, and winter at Traveler’s Rest outside Tampa, Florida. Jeanie was known for her sense of fashion; her no-nonsense sense of humor; and as a “football crowd” hostess during Mizzou home games, a talent earned entertaining NATO general officers, international government officials, even European royalty. Throughout her life, Jeanie was active in charitable organizations, both civilian and military, mostly for the disadvantaged and wounded military personnel. Mrs. Strong is survived by two sons, Gary D. (Peggy) Strong of Post Falls, Idaho, and Craig L. (Judy) Strong of Asheville, North Carolina; four grandchildren: Taylor, Micah, Morgan, and Colin; and twelve great-grandchildren. A memorial service conducted by Gary Strong will be held at 10:00 a.m., Monday, April 18, 2022, in the Funeral Chapel at Valhalla Cemetery, 7600 St. Charles Rock Road, St. Louis, Missouri The family asks that any voluntary contributions be made to the Wounded Warriors Project in lieu of flowers or other memorials.

The family of Margaret Jane Strong created this Life Tributes page to make it easy to share your memories.

Send flowers to the Strong family.