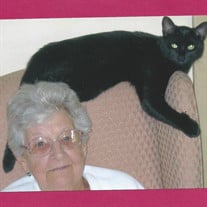 Obituary for Mariel Norrine McRae Grubbs Mariel Norrine McRae Grubbs passed very peacefully from this life on May 29, 2016. She was born on May 11, 1928 in Lincoln, NE. She was the daughter of the Rev. Dr. Glenn McRae and Mary (nee Teeters) McRae both of whom preceded her in death. Mariel was married to Robert (Bob) Ray Grubbs for over 68 years. He also preceded her in death. The McRae family moved to St. Louis in 1929 settling in Overland, MO. Mariel Grubbs was a graduate of Ritenour High School. She and Bob were married on August 17, 1946 after Bob returned from the Navy. They lived for a brief time on a farm in Pearl, IL, moved back to St. Louis and in 1951 bought their current home in St. Ann, MO Mariel Grubbs grew up in and was a lifelong member of the Overland Christian Church in Overland, MO. She held a number of offices in the Church including Chair of the Board and was an Elder. After several years as a stay-at-home mother, she went to work for the Wabash Mill and Supply Co in Berkeley, MO. She worked as a bookkeeper until the Mill closed. She then spent a decade working in doctors' offices as a bookkeeper, receptionist and office assistant. She enjoyed sewing, played the piano and loved to laugh. Mariel is the mother of three children. Lari Grubbs of Crystal City, MO; Bobbie Sue Grubbs (who preceded her in death) and Janice Lea Fox of Winfield, MO. She has five grandchildren: Jamelle Linae (nee Grubbs) Lingle (James) of Peoria, IL; Robbi Ray Grubbs of Herculaneum, MO; Dixie Lea (nee Fox) Brune (Andrew) of Rolla, MO; Debi Marie (nee Fox) Smith of Moscow Mills, MO; and Joe David Fox of Winfield, MO. She is also survived by three great-grandchildren: Kaitlynn Rae Wiley-Grubbs of Hillsboro, MO; Robbi Ray Grubbs II of Herculaneum, MO; and Addison Marie Fox of Moscow Mills. She is further survived by one great, great grandson, Zaiden Moser of Hillsboro, MO and numerous nephews and nieces. Mariel was further preceded in death by two brothers: Lowell McRae and Max McRae and two sisters: Lila Mary Roy and Ruth Tillotson. A private Committal Service will be held at Valhalla Cemetery. A Memorial Service will be held on Thursday,June 2 at 11 am at the Overland Christian Church, 2200 Lackland Avenue in Overland, MO with the Rev. Rich Bregitzer presiding. In lieu of flowers, any gifts are requested as memorials given to the Overland Christian

The family of Mrs. Mariel N. Grubbs created this Life Tributes page to make it easy to share your memories.

Send flowers to the Grubbs family.