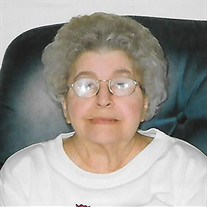 Marion Marguerite Bemis was born on November 12, 1916 at 6:00 p.m. in Huron County Ohio in the village of Monroeville to Reuben Bemis and his wife Alice Gumbert Bemis. Reuben and Alice were both from Monroeville. Reuben was a Piano Refinisher and Alice was a housewife. Monroeville is in rural Northern Ohio near Lake Erie and famed Cedar Point. Marion had two siblings: a sister Elsie Katherine born March 11, 1910 and a brother James Richard Bemis born November 8,1920. She was confirmed at the Baptist Church in Monroeville in 1925. A member of the Ohio 4-H Clubs of Huron County and received Certificates of Achievement in Clothing in 1929 and 1933 given at the Ohio State University. Completed a cours~ in Home Hygiene and Care of the Sick under the auspices of the Huron County Chapter of the American National Red Cross at Monroeville High School in 1934. Graduated from Monroeville Junior-Senior High School on May 28, 1934. After high school she attended business school and worked at a publishing company in Sandusky, Ohio. While working at J.C. Penney in Norwalk Ohio she met Joseph Kappel, Jr. from St. Louis, Mo. Joe was a cabinet maker and at the time remodeled store fronts for a St. Louis company. They married on October 9th, 1949 at the Methodist Parsonage in Norwalk. Rev. Dietrich officiated. Her sister Elsie was the Matron of Honor and brother Jim the best man. After the wedding Joe was transferred to Texas and from there their travels began -- San Antonio, Corpus Christi and other places until she became pregnant with Pat. At that time they settled in St. Louis where Joe's family resided and the economy was good for his trade. Marion and Joe raised their only child, daughter Patricia Ann in St. Louis. They were married for 41 years before he passed in 1990. While in St. Louis Marion was a member of St. Lucas United Church of Christ and later St. Philip's United Church of Christ. She was a devoted wife and mother serving as a Room Mother for Pat's schools, Brownie and Girl Scout Leader, bowled, played cards, sewed all of Pat's dance costumes and formals and even made her a coat when she was young. • Many summers she and Pat would travel by train from Union Station in St. Louis to Cleveland, Ohio where her brother Jim would meet them and take them back to Monroeville to spend time with family and old friends. Monroeville was 60 miles from Cleveland. Joe was unable to join them most of the time because of his job.. Marion enjoyed reading and traveling. Marion remained in St. Louis until 1994 when she moved to Panama City, FL., to be closer to her daughter and son-in-law Don. In Panama City Marion was an active member of AARP Chapter 1315, Gulf Coast Senior Friends, and played cards at the Senior Center in Lynn Haven. She also took short trips with friends and family. She attended Trinity Lutheran Church and later the Church of Christ at Jenks Ave. Marion enjoyed living independently in a nice 2 bedroom apartment in Lynn Haven until her health started to fail. She had a great support group with neighbors, friends and of course Pat and Don. In March 2011 Marion moved to Lisenby Assisted Living and later in February 2013 to Lisenby Skilled Nursing. ---------------------------------~-------------------------------------------------------------------------- Zodiac Sign: Scorpio Honest and Fair Dedicated and Loyal Workers Deep and Intense Cool, Detached and Unemotional yet underneath strong, intense passion, strong will and persistent drive Chinese Zodiac Sign: Year of the Dragon and the Element is Fire Enthusiastic, confident, intelligent, ambitious, hardworking and straightforward Lucky Colors: gold, silver, grayish white Lucky Numbers: 1,6,7 v.: Birthstone is Topaz *************************************************** Marion M. Kappel, 100 yrs. ,passed into etemal life on July 9,2017 in Panama City, Florida. She was preceded in death by her husband, Joseph, of 41 years; sister Elsie Rosswurrn and brother James Bemis. She is survived by her daughter Patricia A. Fisher and husband Donald of Panama City, FL. Beloved, sister-in-law, aunt, great-aunt, great- great-aunt, cousin and friend. Funeral services will be held at Valhalla's Hillcrest Abbey in St. Louis, Mo. In lieu of flowers donations to the Salvation Army.

Marion Marguerite Bemis was born on November 12, 1916 at 6:00 p.m. in Huron County Ohio in the village of Monroeville to Reuben Bemis and his wife Alice Gumbert Bemis. Reuben and Alice were both from Monroeville. Reuben was a Piano Refinisher... View Obituary & Service Information

The family of Mrs. Marion Marguerite Kappel created this Life Tributes page to make it easy to share your memories.

Send flowers to the Kappel family.