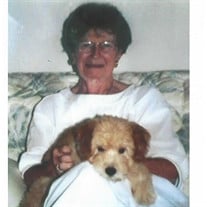 Marion Carolyn Thoenes (Goebel) was born in St. Louis on February 20, 1919. As an only child, she grew up there with her parents, extended family, friends and her dogs. She attended Washington University taking a very active role in both campus and sorority life. Her studies in deaf education took her to Central Institute for the Deaf (CID) which enabled her to gain experience working with children with hearing impairments. Upon graduation from WU, she became a classroom teacher for students with auditory needs in Spartanburg, South Carolina. In 1942, she returned to St. Louis to marry Edward Thoenes her high school sweetheart. In the early part of WWII, they moved to the southeast coast of Florida where Ed served in the US Navy. Marion enjoyed sharing friendships and helping with projects with other military wives on the base. When the war ended, they moved to Anniston, AL so Ed could take a position with Monsanto. There they were blessed with the birth of their son (Edward A) and not long after, a daughter (Sandra). A few months later, they moved back to St. Louis and settled in their new home, which Ed had designed. In 1955, they were delighted to welcome twin daughters, Joan (Costello) and Gail (Bowman). Two years later a new puppy, Lucky, was added to their growing family. After many active years raising their 4 children and successfully getting them started in college and then on to their own careers, the couple moved to Sarasota, FL to enjoy retirement in 1979. A busy life in St. Louis became a "full" life for Marion in Florida. She and Ed traveled quite often, seeing many countries in Europe, then returning to her favorites places with Sandy. In the 22 years she lived on Siesta Key, Marion enjoyed participating in many activities in the condo as well as with the women's group at Siesta Key Chapel. In 2002, she moved in with her daughter, Sandy and Buffie, her "grand dog". Marion was instrumental helping to shape and influence the lives of her 7 grandchildren, 4 of whom were growing up nearby in St. Petersburg. She especially loved holiday times when the entire family gathered together in FL and also enjoyed the blessing of getting to spend some time with her 4 great granddaughters! Marion passed peacefully from this life into the next with her daughters by her side on January 15, 2019. She will be greatly missed..... . Memorial service will be held on April 12. 2019 at 2 pm with visitation beginning at 1 pm at Valhalla Memorial Chapel, 7600 St. Charles Rock Road, St. Louis, MO 63133. In lieu of flowers, the family request donations made to Central Institute for the Deaf at 825 S. Taylor Ave., St. Louis, MO 63110.

Marion Carolyn Thoenes (Goebel) was born in St. Louis on February 20, 1919. As an only child, she grew up there with her parents, extended family, friends and her dogs. She attended Washington University taking a very active role in both campus... View Obituary & Service Information

The family of Mrs. Marion Carolyn Thoenes created this Life Tributes page to make it easy to share your memories.

Send flowers to the Thoenes family.