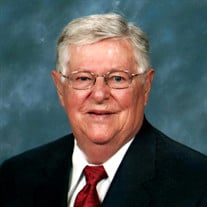 Max H. Burgdorf, Sr., 90, of Columbus, GA, formerly of St. Louis, MO, died November 11, 2014 with his family by his side. He was a beloved father, grandfather, and gentleman. He was preceded in death by his wife of 57 years, Maxine Livingston... View Obituary & Service Information

The family of Mr. Max H. Burgdorf Sr. created this Life Tributes page to make it easy to share your memories.

Send flowers to the Burgdorf family.