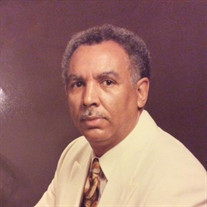 Michael James Simms was born September 14, 1942. Preceding him in death were his parents. He was the youngest of his six siblings. Oldest sister, Gwendolyn Abernathy and two brothers, Barney (Sonny) and Donald (ToeBoy) also preceded him in death. He accepted Christ as his personal Savior as a young man. Michael also called “Mickey” by many graduated from Soldan High School in 1960. He worked as a bartender for ten years in Gaslight Square and at Helen’s Black Eagle. He worked 38 ½ years at AT&T (formerly Southwestern Bell) as a communication technician. In 1970, he married Ellen Dunbar Cobbins. He was the dear father of two children, Denise Michelle and Stevan Gregory. In 1977, he met Brenda Shannon and they enjoyed a loving relationship for thirteen years prior to their marriage on May 22, 1991. Michael never met a stranger and could be a friend immediately. He had a humorous nature and was passionate about playing pool, cards, and bowling. He enjoyed traveling here and abroad. Michael became ill in 2015 and lost his battle with cancer on Sunday, May 28, 2017. Left to cherish his memories are: loving and devoted wife, Brenda son, Stevan Gregory Simms of Tampa, FL daughter, Denise Michelle Etienne (Lamarr) of Denver, CO grandsons, Ashten Simms Alberti & Jaiden Joseph Etienne sisters, Jean Ellen Turner & Francis Simms of St. Louis dear and loving aunt, Ruby D. Carter of St. Louis sister-in-laws, Connie Shannon & Eileen Thomas of Nashville, TN and a host of nieces, nephews, friends. In lieu of flowers, the family request a memorial donation be made to BJC Hospice or National Pancreatic Cancer Foundation (NPCF).

Michael James Simms was born September 14, 1942. Preceding him in death were his parents. He was the youngest of his six siblings. Oldest sister, Gwendolyn Abernathy and two brothers, Barney (Sonny) and Donald (ToeBoy) also preceded him in... View Obituary & Service Information

The family of Mr. Michael James Simms created this Life Tributes page to make it easy to share your memories.

Send flowers to the Simms family.