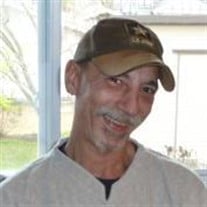 Paul A. Stubits was born May 20th, 1961 to parents Elizabeth A. and Paul J. (deceased). Paul lost his battle with lung cancer on October 15th 2016. Known throughout the St. Louis area as “Chef Pablo”, Paul’s many friends in the restaurant industry came by to give him comfort and provide laughs to him and hid family. Paul is survived by his son Tony, granddaughter Adrianna, mother Elizabeth, and siblings Susan (George) Yerion, Richard (Brigette), Charles, Terry, Marietta (Don) Rhea, Vincent (Teri), Anthony, and Heidi, along with many nieces, nephews, great nieces and nephews. He has also left a void in the heart of his best friend Vicki and the many people he has meet throughout his life that had the pleasure to know him and call him a friend. You will be sorely missed as a son, dad, grandfather, brother, uncle, great uncle, and friend. A celebration of life will be held on November 6th at 4:00 PM. Condolences can be sent to: C/O West End Grill and Pub, 354 N. Boyle St. Louis, MO. 63108

The family of Mr. Paul A. Stubits created this Life Tributes page to make it easy to share your memories.

Send flowers to the Stubits family.