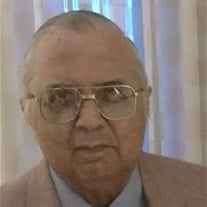 Mehra, Ravinider B., M.D., October 9, 2017. Survivors include four children: Kiren [Sanjeev] Jain, Anita Mehra, Dr Neal [Sima] Mehra, Pamela Mehra; two grandchildren; two brothers: Surinder [Saroj] Mehra and Varinder [Neena] Mehra; and former spouse: Usha Mehra. Dr. Mehra completed his residency at St Louis University and became a well know Cardiologist in St Louis, and was a member of the Crestwood Rotary International. Dr. Ravinder B. Mehra was born in Lahore, a the time of partition between Pakistan and India. He and his younger brother Surinder and father Baijnath and mother Vidhya-Vati barely survived this bloody event during which 6-11 million people died. He made his way to India, going without basic necessities for almost two years of his childhood. He managed to finish college in Pune, India where his mother and father and younger brother relocated and where his younger brother Varindner Mehra was born. His father encouraged him to pursue the medical profession which he excelled at for over 50 years until 2016 December when he retired. He always emphasized family values and value for human life. He struggled with depression for most of his life, but always kept a smile on his face and wanted others to keep smiling as well. Dr. Ravinder B. Mehra came to the US in 1966 and became a US citizen in 1977. He loved his country of origin and he loved his country of citizenship with a passion. He was married to Dr.Usha Mehra from 1964 until 1997, and gave brith to and educated four children, Kiren, Neal, Anita, Pamela. He continued to provide critical support to his family and to his patients until the day that he passed away, October 9, 2017. He had a strong faith in God and was a large tree that gave many people shelt We, his family, hope that all of his good deeds go with him to his next life. He has helped countless people in countless ways. He will be greatly missed for his sense of humor, his acute medical skills, his high intelligence in many areas including business and politics for which he had a passion. He was a highly sensitive person with great common sense. Visitation will be held at Valhalla on Wednesday, Oct 11 from 10-11 am, with Funeral Ceremony at 11. Memorial contributions may be made to the Vedanta Society.

The family of Dr. Ravinider B Mehra created this Life Tributes page to make it easy to share your memories.

Send flowers to the Mehra family.