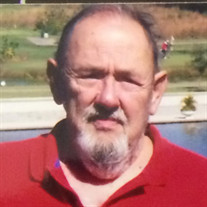 Raymond A. Witthaus 78, passed away April 8, 2015. He was born in St. Louis, MO to the late Vervia and Raymond E. Witthaus. Raymond was a 14 year veteran of the US Army and worked various jobs as an Iron Worker. He loved Forest Park as a youth. Attended musical performances there, and developed a love of light opera. Raymond loved to share stories of roaming St. Louis. He visited Hobo Camps, the Art Museum, and the Zoo. He once rode a bicycle down the long, sloping hill from the Art Museum and landed in the small lake, he would not try that again. He volunteered for the Army at a young age and served in Korea. When he returned home he met a women with 4 little girls. He loved Lois and her girls and in order to support them he rejoined the Army. They all lived at Ft. Bragg NC. They moved back to the St. Louis area when he was sent overseas. He loved his time in the 82nd Airborne; he also served in Vietnam and was stationed at Ft. Leonard Wood in Mo. Working for Ben Hur he became an iron worker. Accepted into the apprentice program, changed his life. He loved being an iron worker for more than 30 years by the time he retired. He worked on many projects in St. Louis and then came to Indianapolis for the Bank One building, As you view that bldg. (now Chase) think of the men and women who "walk the iron". He traveled the world during his army days and independently. Hawaii was a favorite, but he also loved all the sites of the West. Most recent travels were back to Ft. Bragg, then Myrtle Beach, Savannah, and fishing in the gulf. Then our last trip to Niagara Falls, Prince Edward Island, Kingston On. Canada with a stop at Hershey and Lancaster PA finishing up with the 150th anniversary of the Gettysburg battle. Raymond was a proud lifetime member of Ironworker Local 22, Indpls, In of Intl Assoc. of Bridge, Structural, Ornamental and Reinforcing Ironworkers. He was a member of the Downey Av. Christian Church--- Raymond is survived by his wife Pat; son Ray "Tony" (Tammy) Witthaus, Jr.; daughter Vervia (Ron) Mahurin; four step children: Mary (Floyd) Hawes, Barbara Criddle, Faye Kane and Loretta Hawes; 12 grandchildren and many great grandchildren; sister Judy Yarborugh and former wife Carol. He loved life and we will miss his love and humor. Final resting place will be at Jefferson Barracks Military Cemetery, St. Louis Mo. Memorial Contributions may be made to the Local 22 Joint Apprentice program 5600 Dividend Rd Indpls. In 46241

Raymond A. Witthaus 78, passed away April 8, 2015. He was born in St. Louis, MO to the late Vervia and Raymond E. Witthaus. Raymond was a 14 year veteran of the US Army and worked various jobs as an Iron Worker. He loved Forest Park as a youth.... View Obituary & Service Information

The family of Mr. Raymond Anthony Witthaus Sr created this Life Tributes page to make it easy to share your memories.

Send flowers to the Witthaus family.