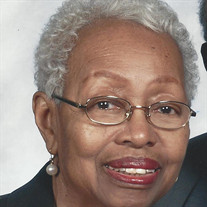 In Loving Memory Of Mrs. Sarah Doris Irons Sunrise October 28, 1925 Sunset May 7, 2017 Ward Chapel African Methodist Episcopal Church 11410 Old Halls Ferry Road Florissant, MO 63033 The Reverend Karen D. Anderson, Officiate LIFE REFLECTIONS Sarah Doris (Nee Petty) Irons was born October 28, 1925 in Artius, MS to proud parents Joseph and Roberta Petty, who preceded her in death. Two brothers and one sister also preceded her in death. The Petty family relocated to Columbus, MS where Sarah professed a hope in Christ at an early age and joined Sanders Chapel A.M.E. Church. The family then moved to St. Louis, MO in 1940. Sarah graduated from Kinloch High School. In 1950 Sarah was united in Holy Matrimony to Albert Lee Irons. No children were born to this union but they became ‘godparents’ to many who called them “Aunt Sarah and Uncle Buddy.” They loved to dance and were blessed to celebrate 59 years of marriage before Albert’s death in 2009. Sarah joined the workforce at McDonnell Douglas in 1957 where she worked for 33 years before retiring in 1990. Sarah joined Ward Chapel A.M.E. Church in Kinloch, MO in 1952. During her 65 years of membership with Ward she served in a variety of ministries. She was a member of the Gospel Chorus, served on the Usher Board and was Secretary of the Usher Board for several years. She was an active and dedicated member of the Sarah Allen Women’s Missionary Society at Ward serving as President, Treasurer and YPD Director. Sarah was instrumental in organizing the Lay Organization at Ward Chapel serving as President for six years and remaining a dedicated and active member until her sunset. She served on the Steward Board for many years. Sarah provided excellent leadership as the Steward Pro-Tem for which she was honored with the status of Steward Pro-Tem Emeritus in 2015. Sarah was an active Stewardess until 2015 when she was consecrated a Deaconess at the 161st Session of the Missouri Annual Conference. On the conference level Sarah served as the Treasurer and Financial Secretary for the Missouri Conference Women’s Missionary Society (WMS). She was a Cleo B. Love Life Member of the WMS and served as Chairperson of the Life Member’s Council until her death. She traveled extensively throughout the Connectional Church with the WMS and the Lay Organization. Mrs. Irons was also a Life member of the National Council of Negro Women. She was President of Unit 5 of Church Women United of Metropolitan St. Louis. Additionally, she served as President and Secretary of the Rushmore Park Block Unit; Chairperson of the Area Council of Block Units; past member of the Board of Managers of the Kinloch YMCA as well as secretary and member of the Kinloch Community Development Advisory Board. Her favorite songs were: “Blessed Assurance” and “I Won’t Complain.” Her favorite scripture was Psalm 27. Mrs. Sarah D. Irons loved God, family, her community and she truly loved Ward Chapel and the AME Church. She gave untiringly and unselfishly of her time, talent and treasure to support the work of the church. Mrs. Irons left an indelible mark in the lives of many as she modeled what it meant to follow Jesus allowing her life and her works to speak for her. She was loved by all and will be truly missed by many. She leaves to cherish her memory Mrs. Elaine Griffin (Goddaughter), Reverend Kenneth Griffin (Godson), Mr. Herbert Irons (Grandson), Mr. Joseph Conley (Grandson), loving and dear friend Mrs. Betty Hatter (Leon) and a host of nieces, nephews, relatives and friends.

The family of Mrs. Sarah D. Irons created this Life Tributes page to make it easy to share your memories.

Send flowers to the Irons family.