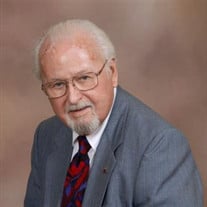 Stanley I. Proctor, Jr. was born to Stanley and Eleanor [nee Seitz] Proctor on December 23, 1936, in Belleville, Illinois. He was baptized at Zion Lutheran Church on June 4, 1947, and confirmed on April 10, 1949. On June 18, 1960 he married Carol J. Kroeger. Their marriage was blessed with two children, Stephen Paul (1966-2017) and James Matthew (1969-2012). He is survived by his cousins; Kerensa Perez, Richard Geib, and Roderick Perez, as well as countless friends and colleagues whose lives he greatly enriched and immeasurably touched. After their marriage, Stan and his family lived in Kirkwood for a time and attended the Lutheran Church of Webster Gardens, where he served as an elder and taught Adult Bible Class. In 1967 the family moved to Chesterfield and attended Trinity Lutheran Church. Pastor Strickert visited in 1968, and Stan and Carol decided to become part of the Mission Congregation that is now King of Kings Lutheran Church. Stan served King of Kings in numerous capacities over the years including Board of Education, Sunday School Superintendent, Building Committee Chairman, Lay Representative to the Missouri District Convention, Church Council Vice President, Chairman of Pastoral Care and Adult Bible Class Teacher. Stan graduated from Washington University, St. Louis, first in 1957 with a BS degree (with honors) in Chemical Engineering. He later received an MS degree in 1962, and a D.Sc. degree in 1972, also in Chemical Engineering from Washington University, St. Louis. He was a member of the School of Engineering and Applied Sciences (SEAS) Alumni Advisory Council for many years and Chairman of the organization’s Scholarship Committee. He served as the Chairman of the Advisory Committee of the Department of Chemical Engineering, an Adjunct Professor and Senior Professor. He was a member of the Advisory Committee of the Environmental, Energy and Chemical Engineering Department, and was Chairman of that department’s Undergraduate Curriculum Advisory Committee. He was presented the Alumni Achievement Award in 1995, and he received the Washington University Distinguished Alumni Award in 2005. The University will be flying their flag at half staff in his honor and in recognition of his significant contributions. He worked for Monsanto Company from 1959 until his retirement in 1993, where he served in several senior level technical and managerial assignments in Engineering, Manufacturing, Process Technology and Research & Development. That same year, he started his own technology and personnel management business, Proctor Consulting Company. Throughout his life, Stan received many recognitions and awards for the excellent work he did in the field of Chemical Engineering. He was also continually active in several professional organizations including the American Institute of Chemical Engineers (AIChE), where he was a Fellow and served as its President in 1987. In 2008, that organization named him as “One of One Hundred Chemical Engineers of the Modern Era.” The Society of Women Engineers presented him with the Rodney D. Chipp Memorial Award for his efforts to support the development of women engineers. Stan also served numerous advisory boards, committees, and foundations. Stan was also involved in his community by serving the City of Chesterfield for many years. He was appointed to the Chesterfield Planning Commission in 2008 and was appointed its Vice-Chairman position in 2012. He was appointed as its Chairman in 2015 and served effectively in that role until his retirement in 2017. Stan was faithful to our Lord, and openly shared his faith with others. He spent his lifetime learning and serving, but where Stan’s gifts really shone brightly was when he taught others about Jesus, books of the Bible, Christian and Lutheran heritage, and leaders of Biblical principles such as Martin Luther. Stan’s periodic teaching of the Book of Revelation was inspiring and legendary. He was a wonderful teacher impacting many who attended his Sunday morning Bible Class, the Saturday morning men’s Bible Class, and special lessons on Biblical and topical issues. He was active in his mission of sharing his vast Christian knowledge with others until the final year of his life. Visitation will be held at King of Kings Lutheran Church, Chesterfield, MO, from 10 a.m. to 11 a.m. on Friday, Feb 5, 2021. The Celebration of Life service will be held at 11 a. m. and will have limited seating due to Covid-19 restrictions. Please register to attend the service online at https://www.kokstl.org/worship-registration or by calling the church office at 314-469-2224. The service will be livestreamed at https://www.kokstl.org/recent-services. In lieu of flowers, Stan has requested that donations be made to King of Kings Lutheran Church, Chesterfield, MO, or Washington University, St. Louis, MO or The St. Louis Zoo. To contribute to King of Kings Lutheran Church, please mail checks to the church at 13765 Olive Blvd., Chesterfield, MO 63017 noting the contribution is in memory of Stanley Proctor. To contribute to Washington University, please use the following link: https://gifts.wustl.edu/?0_d_tr1=52&sc=21. Please fill in the Special Instructions/Comments field with “In honor of Stan Proctor. Designate to EECE annual fund.” Gifts by check may be mailed to: Washington University, McKelvey Engineering, c/o Becky Pitzer, 7425 Forsyth Blvd, Suite 2555, St Louis, MO 63105. Add “Stan Proctor, EECE annual fund” in the Memo section of the check. Stanley and Carol were generous supporters and life-time members of The St. Louis Zoo. Donations to The St. Louis Zoo can be made by check to: Saint Louis Zoo Association One Government Dr. Saint Louis, MO 63110 Attn: In memory of Stanley Proctor or [email protected] Valhalla Funeral Chapel is in charge of the arrangements.

The family of Stanley Irving Proctor Jr. created this Life Tributes page to make it easy to share your memories.

Stanley I. Proctor, Jr. was born to Stanley and Eleanor [nee...

Send flowers to the Proctor family.