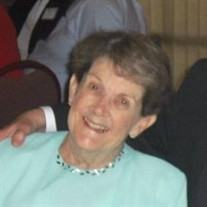 Susanne and Joseph Frank Krispin The perfect ending to an amazing love story! Surrounded by their family on Friday, February 21, 2020, Susanne Krispin, 84 and Joseph Frank Krispin, 88 of St. Louis, Missouri both passed away touching in bed 2.5 hours apart. Love really does last forever. Susanne (Plackmeyer) Krispin was born on September 23, 1935 in St. Louis, Missouri to Emmitt and Laura Plackmeyer with her older sister, Betty Ann Plackmeyer. She adored her parents who sadly died when she was a young girl. She was raised by Ollie Kieser, a friend of the family. Aunt Ollie was always a special part of her life. Sue attended Cleveland High School and two years at Washington University. She then worked at Monsanto as a secretary until she starred in her favorite role as the best wife and mom ever! Joseph Frank Krispin was born on July 26, 1931 in St. Louis, Missouri to Clarence and Marvella Krispin. Marvella remarried and Joe was raised by Marvella (Lefty) and his stepdad, Tom Lloyd. Joe attended Cleveland High School and was the quarterback and captain of the football team. Joe’s first job was at Steak ‘n Shake and he loved to tell his kids he made the most money because he hustled. He attended Missouri School of Miners in Rolla, graduating with a Civil Engineering Degree. He then served two years in Alaska as a Lieutenant in the United States Army. Upon arriving home he worked for the Missouri Highway Department for a few years and then spent his career at Alberici Construction Company building bridges and highways and loved it! Joe was a proud member of the Society of Professional Engineers. The Beginning In the summer of 1954, Sue Plackmeyer was walking her cocker spaniel puppy, Chubby around the block. Joe Krispin had just graduated college and was cutting the grass at his parents as Sue and Chubby walk by. Knowing the yard was small and the puppy walks slowly, Sue picked Chubby up and ran around the block and then put him down to walk again as they approached Joe. He eventually noticed them both and that’s where it all started. The Family Grows Sue and Joe were happily married on April 26th, 1958 and had three children: Karen (Krispin) & Mike Mueller, Kurt & Susan (Wright) Krispin, Karl & Darla (Trout) Krispin; ten adorable grandchildren: Chaz Krispin, Heather (Krispin) & Kyle Erwin, James Krispin in heaven, Joe Krispin & Julie Webb, Sarah (Krispin) & Dylan Carter, Molly Krispin, Brent & Mia Trout, Jason & Crystal Green, Ryan Mueller and Tyler Mueller; and ten precious great grandchildren: Brianna, Kallie, Karli, Brayden, Brooks, Daisy, Maggie, Grasen, Jansen and Lincoln. And a furry friend they loved named Bandit. Sue and Joe were always proud they started all of this. Family was everything to them. Sue was the most organized housekeeper. She was an excellent bowler, even bowling on a scratch league. She enjoyed knitting, playing bridge, and anything and everything that her kids and grandkids were involved in including a room mother in school, girl scout leader, running the concession stand and watching kids play baseball and softball, football, bowling, soccer, Disneyworld, and more. Joe loved to fish, everything from Peacock Bass on the Amazon to Walleye at the annual fishing trip with his sons and grandsons to Canada. Joe was also an avid bowler, even bowled a perfect 300 game! He was also involved in the kid’s activities, coaching the boy’s baseball team, the Krispin Koyotes, Indian Guide leader, basketball coach. The Golden Years Sue and Joe retired in their early 60’s and spent their days with family and friends. They loved having big parties at their house in St. Louis and weekend getaways with fishing and boating at Lake of the Ozarks. They often were traveling with friends in small groups to islands, historical sites, including two-week sailboat trips where they were part of the crew of 6. They always said they were the most relaxing vacations! Joe and Sue were loving, generous, kind, fun, honest people who loved each other and their family. We were blessed to have them in our lives. Please join the family for a Celebration of Life Saturday, February 29, 2020 Bellerive Cemetery in the Mausoleum. Visitation – 9:30 a.m. – 11:30 a.m. Service – 11:30 a.m. Donations may be made to Stray Rescue or the Humane Society of Missouri Flowers may be sent to Bellerive Cemetery.

The family of Susanne Krispin created this Life Tributes page to make it easy to share your memories.

Susanne and Joseph Frank Krispin
The perfect ending to an amazing...

Send flowers to the Krispin family.