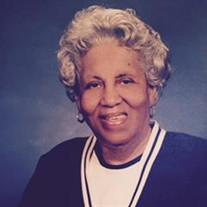 Verdelia Mae Ridley was born August 14, 1925 in Oak Ridge, Louisiana to the late Earmon and Mattie White. She was the oldest of three children. Lindbergh and Zolee preceded her in death. The family left Oak Ridge and moved to Kansas City, Kansas in 1940. After graduating from Sumner High School (KCK) in1943, she completed an Associates Degree at Kansas City Junior College and then attended University of Kansas, Lawrence. She is a member of Zeta Phi Beta Sorority. While visiting her cousin, Eunice, in St. Louis, she met and eventually married the love of her life, Louis Ridley, on December 27, 1947. To this union, two children were born; Patricia Ann, and Pamela Louise. On January 21,1961, Louis departed this life. Verdelia worked for the St. Louis Housing Authority for 31 years before retiring in1987. In addition, she worked part time in the accounting department of the Sears Roebuck Company for over 20 years. Having accepted Christ at an early age in Oak Ridge, Louisiana, Verdelia continued her Christian journey at the Pleasant Green Baptist Church in Kansas. In 1951, she joined the Antioch Baptist Church in St. Louis. She worked tirelessly at Antioch, her passion being coordinating purchases for the Food Pantry. She was a valued member of the following ministries: Women Missionary Union, Dorcas / Priscilla Circle, Antioch Memorial Choir, Golden Age and the “Voices” Church Program Assemblers. She was a faithful Sunday School member and attended Noon Day Bible Study for many years. Always willing to lend a helping hand, call a friend, visit the sick, and be an encourager, Verdelia truly exhibited the heart and spirit of a Christian. She was known for her buttermilk pies, banana puddings, and punch bowl cakes that she generously made for friends in support and love. Her life was filled with people she loved, hobbies she enjoyed and family she adored. She leaves to cherish her memory, her daughters, Patricia Ann Ward (Elwood) of St. Louis, Pamela Louise Olumoya,(Charles Carey) of Fort Washington, Maryland. Grandsons Jonathan Olumoya of Los Angeles, California and Nicholas Olumoya of Greenbelt, Maryland. Verdelia will be missed by many beloved nieces, nephews and cousins, and by an abundance of friends including treasured holiday companions: Cheryl and David Jones, Verbena and Sherwin Reed, and Lyle Terrell. Memorial contributions may be left to: Cancer Research Institute One Exchange Plaza 55 Broadway - Suite 1802 New York, New York 1006

Verdelia Mae Ridley was born August 14, 1925 in Oak Ridge, Louisiana to the late Earmon and Mattie White. She was the oldest of three children. Lindbergh and Zolee preceded her in death. The family left Oak Ridge and moved to Kansas City, Kansas... View Obituary & Service Information

The family of Mrs. Verdelia M. Ridley created this Life Tributes page to make it easy to share your memories.

Send flowers to the Ridley family.