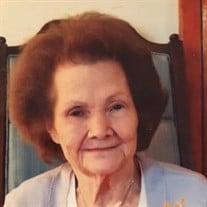 VIVIAN G. EASLEY FEBRUARY 20, 1931- SEPTEMBER 5, 2019 Vivian was born on February 20,1931 in Caruthersville, MO to Elmer and Alice [nee Mayo] Talley, and died in St Louis on September 5, 2019 surrounded by her family. She was the exceptional homemaker, not only for her children, but her grandchildren as well. She was known far and wide as the typical southern cook with a style for hospitality. She had a huge heart and loved her family very much. She was an amazing, beautiful woman inside and out. She was "Mom" to three daughters: Terry [Pat] Cornish, Sheree [Craig] Waterhouse, Kathy Asbrock; Grandma to Angela Morgan, Shaun Giesing, Amanda Asbrock; and Great Grandma to Korrisa, Hollie, Abby, Savannah, and Layla. Preceding her in death were her parents, her husband, Edward Easley, and one son-in-law, Steve Asbrock. Visitation will be held from 10 am-12 pm on Tuesday, September 10th at Bellerive Garden's Mausoleum Chapel, with the Funeral Ceremony at 12 noon, followed by Interment in Bellerive Garden's Cemetery. Services are under the direction of Valhalla Chapel

The family of Vivian G. Easley created this Life Tributes page to make it easy to share your memories.

Send flowers to the Easley family.